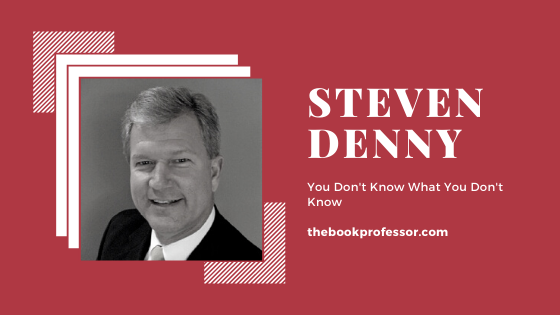 As a partner at merger and acquisitions firm Innovative Business Advisors, Steve Denny specializes in answering questions that business owners don’t know to ask—specifically, questions about how to sell their business.

Running a business and selling one are two very different things, says Steve, and his clients “don’t know what they don’t know” about passing the baton. Steve guides them through the process, whether that means selling, merging, or devising a succession plan for a new owner.

Demand for this guidance will only grow as a “silver wave” of Baby Boomers reach retirement age. This entrepreneurial generation didn’t have access to the variety of business education programs available today. This left many competent Boomer business owners with knowledge gaps, says Steve, especially regarding business succession or sales.

In the face of this silver wave, Steve determined to write a series of books addressing the questions business owners don’t know to ask.

As he was writing his manuscript, Steve met Nancy Erickson and learned about The Book Professor®.

In The Book Professor®, Steve saw an opportunity to get professional editing eyes on his book series. He determined to take his finished draft of the book to Nancy Erickson for advice.

Plot Twist: Back to the Drawing Board

Steve soon discovered that he himself “didn’t know what he didn’t know” about writing.

When Nancy looked over Steve’s manuscript, she helped him see its weak points: disjointed ideas, lack of a clear target audience. As they reviewed his work, Steve realized that to truly help his intended audience, he needed a better book. He’d have to start over.

“That informs a lot of the elements of the book,” Steve says. Answering this question clarifies which topics an author should cover, which anecdotes to tell, what tone of voice to use, and much more.

With these ideas in place, Steve rolled up his sleeves and began the book afresh.

“It was challenging to sit down and rewrite it,” Steve says. Yet it was also exciting to approach the project armed with new knowledge.

Well Worth the Trouble

The prospect of starting over had seemed daunting, but the rewards far outweighed the trouble when Steve received his first round of edits on the new draft.

As he reviewed the manuscript and the editor’s advice on polishing it, Steve felt pride at having worked so hard to improve it. He knew the final product would far exceed the first book in the series in terms of quality. Far from being a headache, rewriting had built Steve’s confidence and brought a sense of achievement.

He also found satisfaction in the friendships with the members of his Executive Group MASTERMIND class. Supportive and eager to help, this cohort offered him a community that understood his writing challenges.

Whether it was writer’s block or some other problem, Steve says, “It was nice to hear from others that they were having similar experiences.”

At last, he had a finished draft of his new book, You Don’t Know What You Don’t Know: A Step-by-Step Guide For Getting the Most From the Sale of Your Business.

Writing is Only Half the Battle

Here’s another thing Steve didn’t know he didn’t know: writing a book is only half the battle. The other half is getting the book to your audience.

“I never wanted to have a case of book copies sitting in my garage,” Steve says. “I didn’t write this for myself, after all.” He wanted the book to reach the people it was intended to help.

Steve shopped around for a publisher, but when he learned that publishers don’t necessarily do the heavy lifting of marketing, he decided to stick with The Book Professor’s sister company, Stonebrook Publishing, and brainstorm a marketing plan with Nancy.

Nancy helped Steve plan book distribution to the advisors that business owners trust, such as attorneys, accountants, and wealth managers. Steve knew that business owners were more likely to read a book referred by a trusted ally than to walk into a bookstore and choose his off the shelf. He hopes to promote the book through his weekly webinar and via guest appearances on podcasts.

Do You Know What You Don’t Know?

Steve is the first to admit he’s not a born writer. “I was not the perfect student,” he says with a laugh. “But Nancy’s steps, and the weekly coaching calls and catch-up sessions, were integral to me getting the book done. If she didn’t have that whole process, I probably would still be a wannabe author.”

Do you know what you don’t know about writing? What about marketing? If you’re like Steve, you may need help to polish and finish your book and get it to its intended audience.

Contact The Book Professor® today to learn about our professional writing coaching, and let’s get your book written!