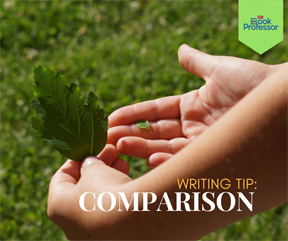 One of the easiest ways to help your readers feel your passion and understand your message is to paint a word picture, and comparison is just the tool to do that. Enjoy this writing tip!

What’s the Purpose of Comparison?

Comparison serves a couple of purposes. It adds complexity to your writing and makes the reader think. It catches their attention and causes them to pay closer attention to the subject matter.

Comparison is also a tool for explaining complex ideas. When we link an unfamiliar idea to common and familiar objects, it simplifies the meaning and makes for good communication. When you use comparison, you help the reader link the concept to their own life and experience, which keeps them invested in your message.

There are three types of comparison: the simile, the metaphor, and the analogy.

A simile is a figure of speech that directly compares two things. It uses a connective word such as like, as, than, or a verb such as resembles.

Similes are so common that you may have ceased to recognize them, but you certainly understand the meaning:

Should you use these kinds of similes in your own writing? No, no , NO! These phrases are cliches. They  are expressions that were once new and fresh, but have been used so often that they’re irritating. When you use a cliché you prove yourself to be a lazy writer, so invest your time to write fresh and innovative similes.

Here’s an example of an interesting simile from George Orwell’s narrative essay “A Hanging.”

They crowded very close about him, with their hands always on him in a careful, caressing grip, as though all the while feeling him to make sure he was there. It was like men handling a fish which is still alive and may jump back into the water.

A metaphor is different from a simile. It compares two unlike things by saying that the one thing is the other thing.

Nonfiction is a long, bumpy road.

A metaphor compares two dissimilar things and finds a point in common. It sounds like you are stating a fact, but you have to think it through for it to make sense.

What do these metaphors communicate?

For example, if you say, “You are the wind beneath my wings,” you’re not saying that a person is actually wind. Instead, you are referring to the support you receive from that person.

An analogy explains an unfamiliar idea or a thing by comparing it to something that is familiar.

Your story is as explosive as dynamite and will blast your readers into action.

An analogy also shows how two different things are similar, but rather than a figure of speech, it’s more of a logical argument. Metaphors and similes are tools that can be used to draw an analogy. Therefore, analogy is more extensive and elaborate than either a simile or a metaphor.

You may remember working with analogies on your SAT or ACT test, or on IQ or Mensa tests. 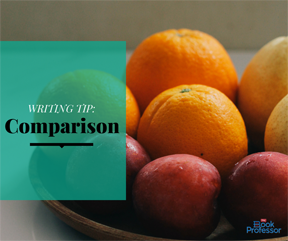 This analogy compares a shard of pottery to a splinter of wood, but you probably won’t use anything like that in your writing. But you may use an analogy like this:

“The structure of an atom is like a solar system. The nucleus is the sun and electrons are the planets that revolve around their sun.”

This example compares the structure of an atom to the solar system, which helps us understand atomic structure. Notice that this analogy used both a simile and a metaphor.

If you’re writing about a complex concept – a technical concept perhaps – an  analogy may bring clarity to the subject matter, and your analogy may include a simile and/or a metaphor. This is getting down into the technicalities of terminology, and I don’t want you to get hung up on the word analogy. But if the  subject matter warrants this type of comparison, by all means use it!

Use This Writing Tip!

When you use comparison in your writing, whether it be through an analogy, a simile, or a metaphor, you engage the reader’s imagination and make your writing interesting and compelling. Remember to respect your readers. They are your partners and are intelligent, thinking people. Don’t take the simplistic approach and spell everything out for them as if they’re kindergartners. Allow them to partner with you and invest their own brain power to interpret your message.