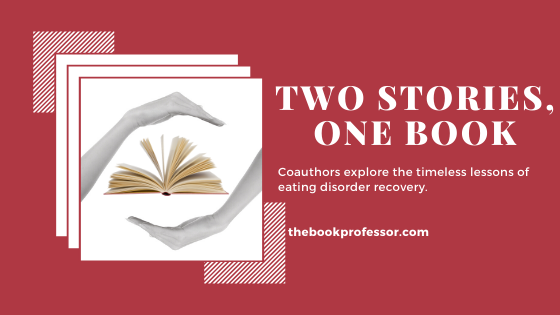 Coauthors explore the timeless lessons of eating disorder recovery, from the ‘80s to now.

Missy Kelley and Alayna Burke might seem an unlikely pair of coauthors because of their age difference. Alayna is a senior in high school; Missy came of age in the ‘80s. But these two women, raised in very different time periods, have a major struggle in common: each overcame an eating disorder.

Missy suffered in the 1980s, throughout her teens and early 20s. Years later, when her friends Patty and Tom shared that their daughter Alayna was struggling with disordered eating, Missy offered moral support.

After Alayna got help for her disorder, she and Missy decided to coauthor a book to help other women with eating disorders.

But neither woman had ever published a book before. Alayna didn’t know where to start, and though Missy had begun drafts of manuscripts a few times over the years, she never finished them.

Then Alayna’s uncle introduced Alayna to Nancy Erickson, founder of The Book Professor®. Nancy’s warm and encouraging demeanor helped Alayna believe that she and Missy could do this with the help of a professional writing coach.

Missy and Alayna joined one of The Book Professor’s Group MASTERMIND cohorts and began their book. Their mission is to tell their recovery stories and show other women that, with help, they can recover, too.

During Module 1 of the Group MASTERMIND program, Alayna and Missy found that they had much to learn about “the writing process.” Ironically, it doesn’t begin with writing. It begins with planning—lots of it.

Missy believed they had the idea for their book hammered out. Alayna pictured a typing marathon of a few months. Both were surprised that The Book Professor’s process would take a year, and that they would begin by addressing what they would write and who they would write it for.

The Group MASTERMIND class helped them go beyond their limited target market of “young women with eating disorders.” They changed their intended market to women of any age who struggle with disordered eating or body shame. Not only that, they realized that parents of suffering women would purchase the book for their daughters, and other friends and family might read it to understand their loved one’s disorder. While their book would primarily be aimed at sufferers, it needed to sound accessible to parents and friends.

They also perfected their purpose statement for the book: “To inspire women with an eating disorder to pursue recovery from the disease, so they can experience emotional and physical freedom and live a full and fulfilling life.” That’s a more targeted goal than “helping people.”

Missy now believes that her former lack of clarity on these points sabotaged her earlier manuscripts. She had always just started a draft and assumed the ideas would flow as she wrote. When spontaneous ideas ran out, so did her writing steam.

Alayna likewise realized she’d gotten ahead of herself in the writing process.

“At first when Nancy said it has to take a year I thought, ‘Whoa! No way!’” says Alayna. She usually prefers to sit down and complete large projects in a few massive work sessions. She hoped the book would take a few months, but Nancy showed her the value of allowing ideas to evolve over time. The slow and steady approach yields better ideas and a better book.

“It’s another level of the healing really,” says Missy, to take such time and care over the work. Reflecting on the material has allowed her and Alayna to process the events of their lives all over again and figure out how best to narrate them.

For example, Missy struggled to identify the “turning point” in her eating disorder when she became committed to recovery. This was a crucial piece. Her readers would want to know “what it was like before, what happened, and what it’s like now.” The “what happened” had Missy stumped. What had changed the trajectory of her eating disorder? Her struggle had been years long and had involved steps forward and backward. How could she sift through all of that and isolate the one event that all else hinged on?

Her question percolated for weeks before she saw the answer. Her moment of change had come when she decided to take a semester off from college to go into recovery. In this moment, she had chosen to treat recovery as the important priority in her life.

This holds important lessons for other young women pursuing recovery, and Missy would not have called it out if not for The Book Professor’s process.

Alayna’s biggest challenge was not the year-long timeframe or the hunt for one moment that changed her trajectory. She struggled most with her own self-doubt.

At first, Alayna hadn’t intended to write her story while still in high school. She assumed she would tell of her experiences and become an author in her 20s or 30s. She only changed her mind because a friend urged her to write a book while the experiences were still fresh.

So Alayna entered the writing process unsure if she was old enough for the task. Beyond that, she worried that other people wouldn’t support her decision. What if her peers thought she was foolish for presuming to write a memoir at 18? What would she say if someone accused her of not knowing what she was doing?

Despite these fears, Alayna persisted. “What keeps me going is that I’m writing this to help other people not feel alone, so it shouldn’t matter what people are going to say,” she says.

All the same, to ward off the prospect of naysayers, Alayna chose to tell only a few close friends about the book until it’s complete.

Alayna and Missy enjoy being coauthors. Because their stories are so similar, they’re able to help each other put their thoughts into words. In addition, they find great value in working with a larger group of writers.

Alayna feels reassured when other members of her cohort share their writing triumphs and setbacks. It keeps her from getting discouraged when she finds one of her weekly writing “assignments” difficult. “If I struggled with a particular assignment, most likely somebody else struggled too,” she says, and they can encourage each other at the next virtual meeting.

Missy agrees. “It helps shore up the confidence that you don’t have to know everything [about writing]. Writing is going to be a struggle, that’s going to be part of the process.”

Alayna also loves having built-in readers who don’t know a lot about her topic. It helps her to see if the ideas in her book come across clearly to the average reader.

“Never a Point of Overwhelm”

Both women appreciate that The Book Professor® program teaches its authors about publication and marketing throughout the writing process. Missy and Alayna didn’t know anything about book ISBN numbers, publication budgets, marketing, or professional editing when they started, but they learn a bit more each week. If they waited until publication to try and tackle those topics, Missy says, it would feel daunting.

“Nancy has really thought through a process that nurtures the writing process while also informing you what you need to know so that there’s never a point of overwhelm,” she says.

The two coauthors appreciate the  tools they now have for marketing their book. After all, the book can’t help anyone if it doesn’t get into the hands of readers.

For Alayna, there’s an extra bonus: she plans to study business in college, and she now has a jump on her peers when it comes to understanding marketing.

Are You Putting Off Your Book?

As Missy and Alayna plan their book and prepare to write a first draft, they recognize that the project wouldn’t get off the ground if not for The Book Professor’s structured program.

As an adult with teen children of her own, Missy has seen how easy it is to never “get around” to a book project. “There will always be things in people’s lives, whether they’re in college, they’re raising children, they have a full-time job—there are always things you can point to and say ‘That’s why I didn’t finish it,’” she says.

What about you? Have you put off that book project too long? Like Missy and Alayna, do you have a story that would help others? Would a writing program be the thing that finally helps you get it done? Contact us today to see how we can help you write your book.