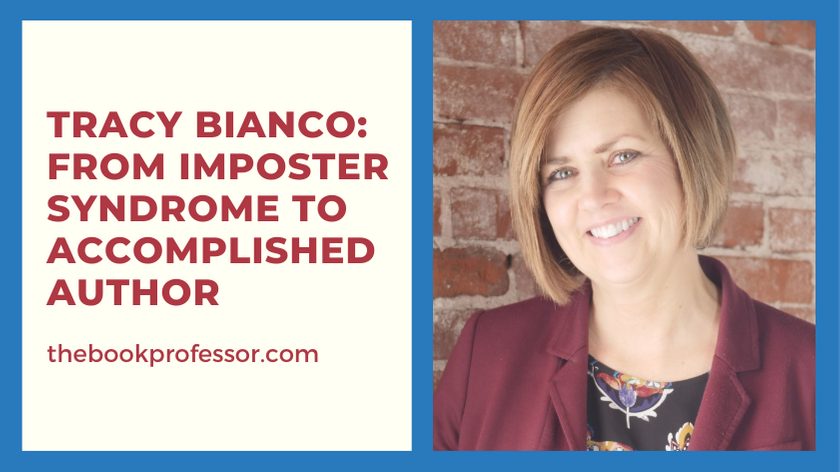 Tracy Bianco’s book The Checklist Life: Breaking Free From a Life of Obligationshas prompted reader responses like, “I felt like you were writing this about me!” and “I feel less alone now.” Readers reach out with gratitude and inspiration.

You might presume Bianco is an accomplished author with five books under her belt to have written a book that garnered this kind of reaction. In fact, when Tracy Bianco faced a blank computer screen on her first day of writing, she was a newbie who felt nothing like an “author.”

She got there with perseverance, hard work, and a lot of guidance from The Book Professor®.

Early Stirrings of a Book Topic

Tracy Bianco followed the life “checklist” the average American woman is supposed to aspire to: marriage, kids, a high-powered job. Although she loved her family and had accomplished much, she still felt unfulfilled. So, she began to make small decisions, professional and personal, to improve her life, be it quitting a job she disliked or spending less time with negative people. She began her own company, Bright Side Training Solutions, to provide leadership and team coaching to business professionals.

Bianco realized that over time these individual decisions had added up to a radical change in her happiness. Friends and family remarked on the change within her. She began to meet people who had also lived a checklist life but wanted something more. They seemed to respond to her story.

Bianco wondered: should she write a book to teach others what she had learned about going beyond the checklist?

The idea stayed just an idea, in part because Bianco didn’t know how or where to start. Then she met a client of The Book Professor® who recommended the program. Bianco met The Book Professor® founder Nancy Erickson at a conference and spoke to her about the potential book idea. Bianco left the encounter feeling the tug of possibility. Maybe she did have a solid idea. Maybe she could write an entire manuscript. At the very least, authoring a book might help her career. So Bianco signed up for The Book Professor’s Executive Group Mastermind course and joined a cohort of several other writers.

Bianco soon discovered that writing a book was far less intimidating, yet somehow far more demanding, than she had imagined.

When Bianco started the Group Mastermind course, the overwhelm of the blank computer screen intimidated her. She thought of all the fat-spined books in her favorite bookstore. They were lengthy. They were bursting with information. They were no doubt written by geniuses, she thought. “How in the world am I going to get to that point as a writer?” she asked herself.

Bianco soon learned she’d get to “that point” the way every writer does: one step at a time.

The Book Professor® course helped her refine the ideas for her book and build the BookMAPs of her chapters one by one. By the time Bianco reached the writing module, she no longer had a blank computer screen; she had a robust plan. She didn’t have to know how to conceptualize, write, and finish the book from word one. All she had to know was the next right step.

From Strangers to Friends

“In reality, I think everybody was thinking that,” Bianco says. “None of us had already written a book.” To her relief, others in the group admitted to being nervous about sharing their work.

Bianco’s fears (and everyone else’s) eased as the program got underway. They loved listening to each other’s material and offered helpful feedback. It became clear that they each had a different writing voice and a unique story, so there was no threat of competition or comparison. They cheered each other on.

Months later, Bianco can still rattle off the book topics her cohort members wrote about, because she became invested in those projects, just as they did in hers.

In addition to a positive cohort experience, Bianco also appreciated the structure of the course. Its three modules walked writers through different stages of the writing process. Nancy guided the group through the planning stage, when they created their BookMAPs; the writing phase to hammer out first drafts; and an editing phase to make the books shine.

“Within each module the material was very systematic,” Bianco says. She and her fellow authors gained access to lessons and homework assignments one week at a time to ensure no one skipped ahead and accidentally sabotaged their own writing process. And because the material was organized by week, it was easy to refer back to previous lessons when needed.

“I know with 100% certainty I could not have ended up with the book I did without that system,” Bianco says of The Book Professor® course.

The homework assignments helped too. With kids and grandkids often at the house, Bianco could easily have fallen behind in her writing. But her fellow authors expected her to bring material to read aloud at each weekly phone chat with her cohort. This expectation motivated her to hit her weekly wordcount, even if that meant sitting down to the desk at 8 p.m. on a Sunday night.

The Power of the Vulnerable

Bianco did not initially expect vulnerability to be part of the writer’s life.

She’d already begun cultivating vulnerability in her own life. She had worked to overcome her natural privacy and discretion to forge stronger ties with friends and coworkers. Now it seemed that practice would serve her book as well.

Nancy explained to Bianco’s cohort that a book should begin with material that hooks the reader, draws them in, makes them want to keep reading. Bianco knew the most interesting stories from her own life were the ones she seldom disclosed.

So Bianco took a chance and opened her book with the story of telling her Catholic parents, at age 18, that she was pregnant. Throughout the book, where appropriate, she shared vulnerable moments from other points in her life, such as the internal struggles she faced following her daughter’s cancer diagnosis in 2015. Bianco selected these vulnerable stories with care and sought permission from people involved when needed. She did not turn her entire life into an open book, but she stretched her vulnerability boundaries. This resulted in a stronger manuscript with emotional hooks readers could connect to.

Editing: Not for the Faint of Heart

The toughest challenge Bianco faced as a writer was editing.

She thought editing would consist of trimming excess details—too many examples here, an unneeded anecdote there. Nancy’s editing process, however, required deep thought and tough decisions. She taught Bianco about trouble spots in writing, such as over-reliance on “ing” words and adverbs, and had Bianco highlight any place in the document where those issues showed up. As Bianco highlighted, each page of her manuscript lit up with color, much to her own surprise. She rolled up her sleeves and got to work to make her language as clear and understandable to a reader as possible.

Bianco jokes that she entered the program thinking the writing stage would be the hardest and left with a deep respect for the toil of edits.

The effort was well worth it when Bianco held her finished book in her hands. The Checklist Life: Breaking Free From a Life of Obligations tells the story of her journey away from the perfect-on-paper life into an existence more real and fulfilling.

“I felt like I had accomplished something on my bucket list,” she says. She often thinks to herself in amazement, I actually did this!

Since its publication in June 2020, the book has increased Bianco’s profile as a leader in her field. She announced the book on social media, led a virtual book club, and emailed videos of the book club to her mailing list. She received invitations to leadership and self-help podcasts. Her connections grew, and it gave her the courage to reach out to industry leaders she wouldn’t have contacted before.

With COVID-19 still affecting daily life, Bianco has seen an increase in workers and leaders who need her coaching services. As people accept their new normal, they become determined to take the next steps in their lives despite the challenges. Her business is booming, thanks in part to the credibility she earned in sharing her own story of leadership and change.

The best reward, however, is the responses from readers.

“I felt like you were writing this about me!” she hears time and again. Feeling trapped by obligations is a common theme among the professionals who contact her. She’s pleased that her story has helped readers think through their own lives and the changes they might make.

Readers have specifically thanked her for sharing the vulnerable parts of her story. “I feel less alone now,” they say, and Bianco is grateful she had the courage to open up.

Who Needs the Story You Have to Tell?

If you’re hesitant to write your book because you don’t think you’re cut out to be a “real” author, take it from Bianco: anyone willing to put one foot in front of the other can do it.

Who needs the story you have to tell? What would they say to thank you if you shared it with them?

Let The Book Professor® guide you. Join a cohort of budding authors or get personalized coaching from founder Nancy Erickson. Contact us today to get started.