The Healing Power of Writing 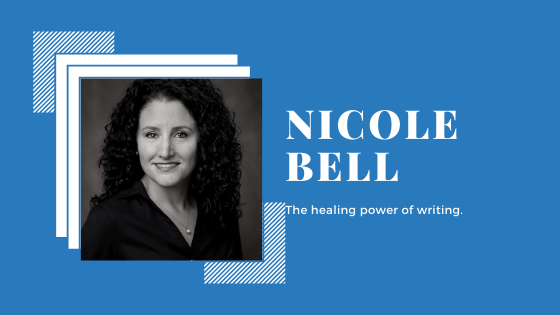 In writing a difficult story, author Nicole Bell came to peace with her own grief.

A well-written memoir has the power to turn even painful tragedies into a message of hope for others.

Nicole Bell seemed to have the perfect life with her loving husband, two young children, and rewarding career. Then, her husband Russ developed a mysterious illness, and their happy life crumbled. Russ’s personality changed. He became forgetful and angry and couldn’t be trusted with daily tasks.

Doctors diagnosed Russ with early onset Alzheimer’s disease, but it didn’t make sense given his medical history. It took Nicole long and painful years to find the answer: Russ was suffering from severe neurological symptoms due to a tick-borne illness and heavy metal toxicity.

Tragically, the answers came too late for Russ to recover.

Nicole kept a journal throughout the chaos and grief of that time. Later, she decided to turn those journaled memories into a book. At first, Nicole was writing the book for herself and her family. She thought it would help her process her emotions and provide an important window into who Russ used to be, so she and her children would not forget.

Nicole soon began to suspect that she was writing this book for a larger purpose.

Purpose Bigger Than Self

Nicole met Nancy Erickson through a mutual friend and decided to use The Book Professor® to help her write her manuscript.

“During the first phase of the book writing process with Nancy,” Nicole remembers, “when you map out your goals and your purpose [for writing], Nancy’s really big on trying to understand what the message is. Why are you telling your story?”

Nicole’s first motivation had been to write the book as part of a healing journey. She needed to look back at the terrible days and nights that had seemed like one big nightmarish blur and try to make sense of it all. But a parallel motivation was taking shape as she worked on her book’s purpose statement.

“I realized that I had a calling not only to write it for myself but to help others,” Nicole says.

Nicole had become involved in raising awareness about tick-borne illnesses, an area of medicine that Nicole and other sufferers believe is poorly understood by many health professionals. Nicole met other patients whose stories mirrored that of her husband: misdiagnosis, a long fight for answers, trouble securing appropriate treatment.

Nicole wanted to give others the resources to advocate for themselves and their loved ones. She didn’t want others to suffer as her family had suffered. She hoped her story might spur others to investigate their own illnesses before it was too late.

Nicole’s belief in her book didn’t make it any easier to write, of course.

“This was a very raw story,” she says. Nicole had to include many anecdotes from her time as a grief-stricken caregiver. She was experiencing the emotions from many of these events for the first time, as the chaos of her husband’s illness had left her little space to process in the moment.

Exposing something so painful to a group of strangers in the Executive Group MASTERMIND program felt intimidating at first. But it served an important purpose. After all, one day the story would go public for the world to see. Nicole needed to learn how to share it with a few before she could share it with many.

So she leaned into the discomfort of vulnerability. To her relief, she found the other authors in her MASTERMIND class ready to do the same. Of the five authors who completed the course in her cohort, four had “overcomer” stories of surviving personal hardship. “Most of our group had been through serious emotional experiences,” Nicole says. They were all, to some extent, processing the pains of the past. This made the group a safe place for all of them to share the darkest moments of their stories.

Working with a MASTERCLASS had additional benefit, of course: the feedback from other readers. Nicole felt that her fellow authors gave constructive feedback that helped her see how her writing landed with an outside audience who didn’t already know her story. This was the practice she needed before sending her story out into the world.

From Tech Writing to Storytelling

Nicole had never written anything like this before. Her career was in electronics, then medical devices and surgical robotics. While she’d written plenty of technical documents in her day, a story loaded with emotion was completely outside her comfort zone.

It was a major reason why she’d wanted to work with a book coach, and The Book Professor® did not disappoint. The BookMAP process, in particular, helped Nicole wrangle her sprawling, chaotic memories into a story format. She began by mapping out the timeline of everything that happened in relation to Russ’s illness. From this starting point, she could decide how to tell the story in a way that would build suspense for the audience and paint an accurate picture of just how dramatically her husband had changed. She opted to jump around the timeline at the beginning of the book, in order to juxtapose how Russ used to be and how the disease had changed him. For the second half of the book, she stuck to the timeline as it played out. Nicole believes that having the entire manuscript mapped out ahead of time made the writing much, much easier than it would otherwise have been.

Nicole was also surprised by the amount of rewriting involved in creating a polished nonfiction manuscript. To Nicole, “editing” had always meant checking for typos and grammar mistakes. Before The Book Professor®, it never occurred to her that you might have to rearrange, rewrite, and rethink material beyond the first draft. The process made her book so much stronger than it would otherwise have been.

A Memoir of Hope and Determination

The resulting memoir, titled What Lurks in the Woods, was a heartfelt, suspenseful, and loving tribute to Russ and the journey they’d traveled. Nicole emphasizes that it’s not only a book about chronic illness. It’s also a love story, and a window into the life of a caregiver. Perhaps most importantly, it’s a book that encourages readers to become their own health advocates.

“You really need to own your own wellness,” Nicole says. Her book reveals the difficulty of living with a chronic illness within a healthcare system that presumes 15-minute doctor appointments and quick, tidy diagnoses. Nicole encourages readers to document their medical history and procedures, research their health conditions and symptoms, look for root causes, and seek doctors who will explore possibilities.

Another strong theme within the book is trusting your gut when it comes to chronic illness. One of the most frustrating aspects of Nicole’s story is that she had suggested the possibility of tick-borne illness at the very start of her husband’s diagnostic journey, but Russ’s doctor at the time had administered a less-than-reliable diagnostic test and dismissed the possibility. In retrospect, Nicole saw that her gut instinct was right. She hopes other patients will listen to their symptoms and find doctors who will heed the patient perspective.

Striking a Chord with Readers

Shortly after the book’s release, it became obvious that Nicole’s story had struck a chord with readers.

“The feedback has been overwhelmingly heartwarming. So many people are connecting with the book,” Nicole says. Many satisfied readers are those living with chronic illness, but some individuals with no history of major illness also find her book compelling.

Caregivers, she says, tend to connect strongly to the book. Memoirs about chronic illness are typically written from the perspective of the patient, and it’s less common to find books written by caregivers. “Nobody plans to be a caregiver,” Nicole says. “And nobody gives you tools to navigate the chaos and destruction that can ensue.” She hopes her book will be a beacon of hope and advice to others who find themselves thrust unexpectedly into a painful caregiving role.

Her book was named a finalist for the American Bookfest Awards, received the Gold Award from Literary Titan, and has garnered wonderful independent reviews on Goodreads. Nicole has appeared on podcasts and webinars, and at speaking events, promoting Russ’s story and her message of medical empowerment for patients.

Turn Your Pain into Healing for Others

Many writers who have survived painful or traumatic events feel the way Nicole felt at first about writing the story down: intimidated.

Just as many find that if they persevere, the resulting book has the power to impact more people than they imagined.

Is there a story you’re holding back from the world because you’re daunted by the prospect of sharing those memories with others? What if you knew that doing so could help real people in a tangible way?

Contact The Book Professor® today and let’s talk about your story.