Say “Yes” to the Book 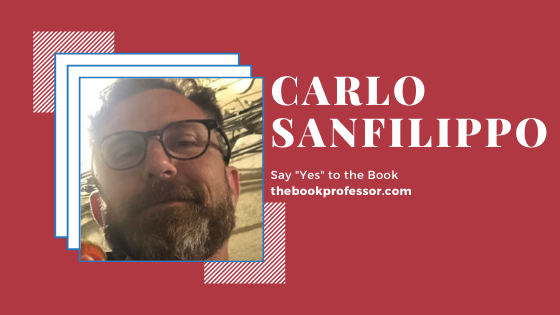 Carlo Sanfilippo seemed to have it all. A successful financial planner with money, a home, and a family, he had achieved the American Dream by midlife.

Sanfilippo suffered a divorce and the death of his mother, father, and stepfather within a four-year period. This reckoning with mortality and endings sent him into what he calls a time of change and transformation in his personal life. Suddenly, the things that felt stable and important before felt hollow. Sanfilippo realized he hadn’t been living intentionally. He had ignored passions and passed up opportunities if they varied from an “average” life path.

As a financial planner, he saw the irony. “If you don’t know what you want, it doesn’t matter how much money you have,” he realized.

So Sanfilippo began saying “yes” to things he’d brushed aside before. He said yes to learning Italian, a years-long dream that had always seemed impractical. He said yes to a trip to Italy with his children, where they met distant relatives on his grandfather’s side. This led to new connections in his life and precious memories with his family.

It took him longer to say yes to the next idea: writing a book.

His personal story of transformation seemed to fascinate others, so he thought perhaps he should share what he’d learned in a book. His business partner at the time seemed skeptical of the idea. They were financial planners, he pointed out, not authors.

So Sanfilippo shelved the idea for six years, until a mutual friend introduced him to Nancy Erickson, founder of The Book Professor®.

When Sanfilippo met Nancy and learned about The Book Professor’s coaching program, a new seed of confidence pushed its way through the doubt. Maybe he could be an author after all.

He enrolled in the 1-2-1 Personal Coaching program and worked directly with Nancy to begin his book After LIFE: Waking Up from My American Dream. Right away, Sanfilippo knew that The Book Professor® would help him write a better book than he could write on his own. At first, he didn’t know where to start or how to organize his ideas. The Book Professor® helped him narrow down his theme and his audience, and clarify the many ideas in his head.

“The process helped pull my book out of me,” Sanfilippo says. “There were many times when I had the feeling that Nancy was helping extract this book from my brain.”

Sanfilippo remembers the BookMAP exercises as especially helpful in clarifying ideas. The BookMAP also helped him stay focused and confident throughout the actual writing process. “I didn’t have to finish a chapter and say, ‘Well now what am I going to write about?’ It was already laid out,” he says.

For each chapter, he already knew the subject matter, the main points, and the anecdotes he would share. He also knew how to order the chapters.

The Book Professor® helped Sanfilippo relearn the nuts and bolts of longform writing. As a financial planner, he hadn’t written essays or papers since college, more than 20 years earlier.

The writing schedule Nancy gave Sanfilippo helped him get back in the habit of drafting pages of written content at a time. He worked five days per week for months on his rough draft, and soon, the habit felt natural.

“I kind of built those [writing] muscles again, not because Nancy was forcing me to, but because the structure was there,” he says. He found her critiques and her encouragement motivating. She would often remark that she couldn’t wait to see what came next in his book, and Sanfilippo would grow more confident that he’d made the right choice in taking on this project.

He loved the drafting stage because he didn’t have to worry about editing, perfect grammar, page numbers, or anything else. “I could just get it out of my head and get it over to Nancy. That was so freeing,” he remembers.

Nancy also helped Sanfilippo overcome a bigger hurdle: his own hesitancy to share the story.

“My story was very personal and it was very vulnerable to tell,” he recalls. “It was hard to say some of the things I had to say out loud.”

He had, after all, dealt with a tremendous series of losses and then acknowledged his own disappointments about his life. This was heavy subject matter. It wasn’t always comfortable to write it down, and in addition, Sanfilippo—like many of The Book Professor’s aspiring authors—mistakenly worried that no one would be interested in his story.

Nancy’s encouragement got Sanfilippo through his doubts. Her enthusiastic engagement with his material reassured him of his story’s appeal to an audience. When his writing touched her on an emotional level, she let him know. Nancy insisted that not only would Sanfilippo’s story help others, but his vulnerability would be the very thing that made the book accessible to them.

Sharing his story with Nancy first helped prepare Sanfilippo for the day when he will share the book with the world.

He wants to give readers that same permission to follow an inner voice and say yes to a passion. So it’s fitting that even the act of writing his book was a “yes” to that inner voice. A book about living on purpose might not have been the likely or expected path from a financial planner, but as Sanfilippo knows, the “expected” path is not the only option.

He hopes that the book will help “anyone who feels pulled to do something that they’re maybe a little scared of.”

That might be a college student afraid to change majors, or a 65-year-old afraid to face retirement. He’s seen people of all ages and backgrounds try new things, face fears, and reap the benefits. “I have 70-year-old clients learning new things all the time,” he observes.

Sanfilippo wants people to understand that even simple changes can make life richer. You don’t have to travel to Italy, become famous, or launch a new career if you don’t want to; just follow your inner voice and find your specific adventures.

As for Sanfilippo’s next adventure, he’s launched a podcast. The podcast interviews individuals who followed passions down a new path. He especially likes interviewing those who help others, such as life coaches and therapists.

Say Yes to Your Book

Say yes to your book idea!

Maybe you’re like Sanfilippo: you have an idea for a book. You think your idea might help others. But you’re not sure you can write a book.

With The Book Professor®, you can. All it takes is a “yes” from you. We’ll help you find your theme, organize your ideas, write the book, and perfect it.

Don’t shelve your idea any longer. Contact us today and let’s get started.