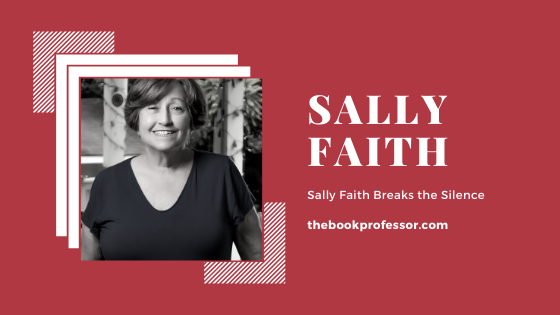 Dementia is hard to talk about, so this retired politician started writing instead.

As a mother, politician, and involved community member, Sally Faith had enjoyed a rich and active life.

Sally navigated raising a son and managing a career for many years. In the 1980s she entered the political arena in Missouri, where she helped establish the St. Charles Community College, served on the St. Charles City Council, completed four terms in the Missouri House of Representatives, and finished up with two terms as mayor of St. Charles. Sally also maintained involvement in her community and her church, even teaching herself to play the piano by ear and playing for Sunday services. She enjoyed watching her grandchildren grow up and start their own families. Even retirement didn’t slow Sally down. She stayed as busy as ever reaching out to friends and engaging in social activities.

Then, life threw a curveball.

A little under a year ago, her son Howard came to visit with something on his mind. He and a few of Sally’s friends were worried about her mental state, he said. They felt she was not as sharp as usual. Sally herself had noticed it, but written it off as pandemic stress. At Howard’s urging, she visited a doctor, expecting him to dismiss everyone’s concerns.

Instead, Sally received the kind of news no one wants to hear: she was in the early stages of dementia.

Breaking the Silence Via Book

It was hard to accept the diagnosis at first, but once the shock wore off, Sally realized she must continue to live life. She should enjoy every day as much as possible, she decided, not just lay down and wait for the inevitable. So, Sally set about making plans. She and Howard arranged for home care that will allow her to live at home as long as possible, and selected a care facility for the future. With the necessary logistics squared away, Sally is free to continue living every day as it comes, adjusting to new challenges one step at a time.

What she didn’t anticipate was the difficulty of telling other people about her diagnosis.

“I didn’t know how to address it,” Sally says. As she broke the news to friends one by one, many of them assumed Sally would want to keep the diagnosis secret, as if dementia were something that no one would acknowledge in public.

Sally realized that if she were having trouble talking openly about dementia, then others in the early stages of dementia must have the same problem. She wanted to break the silence and dispel the isolation and hopelessness that can come with the diagnosis. The best way to do that, she decided, was to write a book.

Sally had actually considered writing a book before her diagnosis. She had met Nancy Erickson, founder of The Book Professor®, and loved Nancy’s belief that every person has an interesting story to tell. The two women had already begun to discuss potential topics for a memoir about Sally’s life. Then, Sally received her diagnosis and decided to change topics. Nancy agreed with the shift in direction.

Sally began writing about what she’s learned from living with early-stage dementia. “The purpose of this book is to offer hope and help to those diagnosed with dementia and to show them how to develop a positive mindset through the stages of their illness,” she says.

Sally wants the book to speak frankly to readers. There’s no use sugarcoating the seriousness of the diagnosis, she says, but there’s still hope for goodness and meaning in life. She wants to inspire her readers to live well despite their new circumstances.

Sally plans to write about the ways in which a dementia patient’s life and habits may have to change. When memory is affected, it’s critical to embrace new habits that help maintain a normal routine. For example, Sally keeps a planner just as she always has, but because she sometime forgets to check it now, she also leaves sticky notes around her house to jog her memory about important appointments.

She also wants to show how a diagnosis can inspire positive change—such as the changes she made in her relationships with friends. When she realized that her time of independence and socializing had grown short, Sally was inspired to prioritize friendship in a new way. She began reaching out to friends and acquaintances she hadn’t seen lately. She now has more lunches and coffee chats with a greater variety of people than before. Knowing that her time with friends will come to an end, Sally sees with new clarity how much they mean to her.

Sally hopes to encourage her audience to keep a sense of humor about themselves and their lives. “We have to keep humor in our life. It’s important for our survival,” she says.

“I knew nothing about writing a book,” Sally says. Even before dementia complicated the picture, when she planned to write a memoir of her life, Sally knew she’d need The Book Professor® to lead her through the writing process and the details of publication.

As early dementia created new obstacles, The Book Professor® schedule and curriculum became a godsend for Sally. The bite-sized lessons and regular due dates, along with Nancy’s instructions to make writing time part of the weekly routine, helped Sally stay on track and make weekly progress on her manuscript. Sally, ever the detail-oriented planner, was pleased to have a curriculum tell her exactly which facet of the book to work on next.

The feedback of other writers was another unexpected benefit of joining The Book Professor®. Sally chose the Executive Group MASTERMIND program and soon got to know the other writers in her cohort. She and the others became comfortable giving feedback and asking questions about one another’s work, and their manuscripts grew stronger for it. The regular cohort meetings created a platform for Sally and other aspiring writers to ask questions about the writing process without feeling embarrassed. Sally especially appreciates the diversity of perspective she receives from her group. Her cohort members hail from many different regions and write about various topics, and she benefits from this broad scope of insight.

As Sally continues to work on the first draft of her manuscript, she’s grateful for all The Book Professor® has given her.

Sally may not be able to predict how her life will play out moving forward, nor control the circumstances she finds herself in. But she finds peace knowing that she can control the legacy she leaves behind, including a manuscript of hope and help for others with her diagnosis.

She credits The Book Professor® with helping her accomplish the work. “The program is a great opportunity, and anyone thinking about it should do it.”

Do you have a story to tell or a legacy to leave behind in book form? Would an organized, guided program and the encouragement of other writers help you get it done? Contact The Book Professor® today and let’s talk about getting your manuscript written.