Rolling with the Punches: One Man’s Powerful Journey from Boxer to Book Author 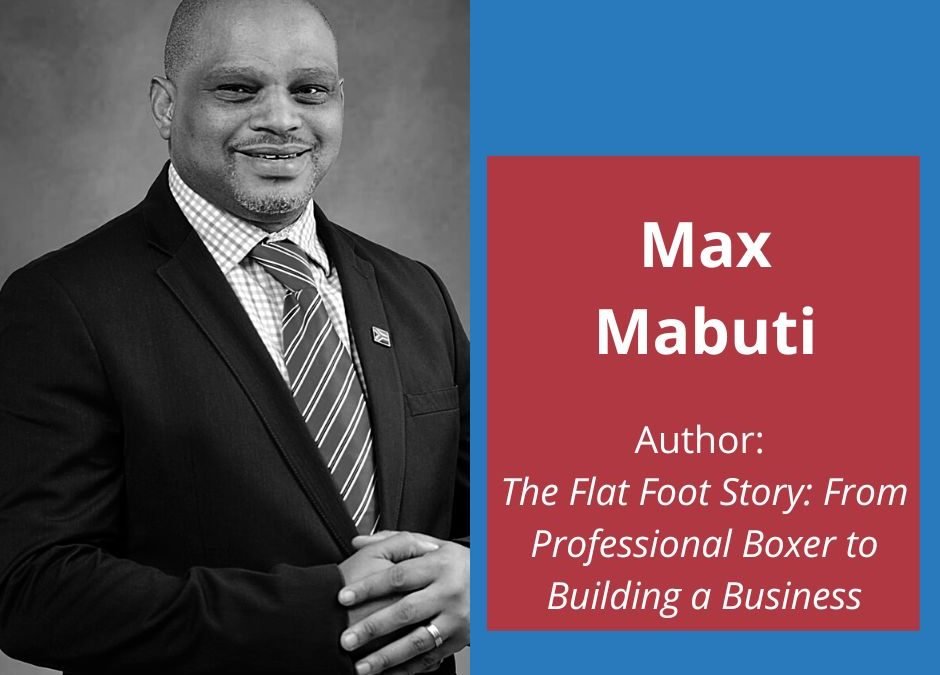 For Max Mabuti, boxing and writing a book weren’t so different. Both require discipline and helped him reconcile with his tragic past. Max was born in South Africa during apartheid, a turbulent time in South African history when the ruling white government enforced segregationist, racist policies against the non-white majority. For over fifty years any Black citizen was separated almost completely from the white class. Max’s father was a minister during those decades, and the young boy lived with mother, sister, and grandfather. One seemingly ordinary night, his family suffered a brutal attack at the hands of unknown men. The masked assailants left his parents beaten, his sister raped, and his grandfather murdered.

A self-described “angry child” following the horrific incident, Max redirected his rage into a career as a professional boxer. He had joined the sport as an excuse to fight, but the discipline that boxing demanded surprised him. He learned restraint, patience, and how to successfully put into practice the advice he received from his elders. Those methods were exactly what he needed to begin healing from his trauma, and Max fell in love with boxing enough that it became, in his words, his “daily bread.”

Decades later, that same discipline frames his perspective on the business world. Max realized the affinity for leadership he’d demonstrated as his East London University’s SRC President could translate into a profession, and in 2006 he founded a total mechanical engineering provider named Flat-Foot Engineering. The company specializes in next-generation electro-mechanical solutions for its customers and currently employs over seventy staff members across several offices.

With a myriad of experiences under his proverbial belt, it wasn’t until Max attended a conference in Las Vegas that the idea of a book surfaced. After giving a speech about his life and the Flat-Foot company, he received a standing ovation and numerous seasoned authors encouraged him to write a memoir. They saw enormous inspirational potential in his story and knew it needed to reach people far outside a Las Vegas conference room.

After some consideration, Max agreed. From his perspective as an entrepreneur, maybe sharing the ways he’d overcome obstacles would help struggling business owners at the heart of South Africa’s economy. He hoped that even though he couldn’t mentor them personally, through nonfiction he could be every reader’s corner man: a boxing term for the person in the literal corner of the ring who provides the fighter with advice and encouragement.

To start, Max needed his own corner man. Just like learning a new sport or running a business, Max knew that writing a book without the proper mentor was an exercise in failure. Thankfully, he didn’t have to look far. Following his speech in Las Vegas, an author pointed him toward The Book Professor®, Nancy Erickson. She assured Max that she would “hold [his] hand” from start to finish. With her guidance, the book Max published would be as professional as any international bestseller and an achievement he could take pride in.

Without a doubt, Max knew Nancy was in his corner.

The Corner Man in Action

As part of the Executive Writing Group MASTERMIND program, Max began his authorial journey by building out his BookMAPS. He knew his goals for his book but needed to organize those internal thoughts into a coherent external structure. It was a process he loved, likening it to laying the foundation and drawing the blueprints for a house. Once he and Nancy established the framework of his manuscript, ensuring that every piece fit together, Max was free to shift to writing compelling prose. It was easy, even for someone without prior experience.

“I would never say when I met her there was anything that was difficult,” says Max. “Everything [flowed] into place.”

The Book Professor® also made sure Max’s book represented him authentically. Rather than an assembly line where every book sounds alike and follows the same format, Nancy took interest in what made Max – and his contributions to the world – unique. She coached him until he was confident in his authorial voice. Every word on the page was his own.

It made sense; no one knew Max’s story or was capable of telling it better than Max himself. His mentor believing in his vision meant he wouldn’t fail.

A Family Gathering of Authors

The Executive Writing Group cohort also provided Max with vital support – and fun. Working by himself struck Max as a lonely venture, whereas discussing his developing manuscript with fellow authors proved invigorating. Not only did the group ask profound questions, bounce ideas back and forth, and problem-solve, they listened with open hearts to one another’s stories. Max describes those meetings as a personal highlight and “more like a family gathering” in their comradery. Each individual committed themselves to helping everyone else create the best book possible, resulting in a secure support system. Sometimes the strongest ideas and most streamlined solutions emerged from the group sessions.

In addition, Max found talking about his life therapeutic. He cried as he transformed those traumatic childhood memories into scenes on a page. Ultimately it helped to relive his experiences as an adult, and his cohorts remaining interested, supportive, and nonjudgmental made all the difference.

“My story is a story of grit,” says Max. “It was not smooth sailing; it has been tough.” But because of his determination to encourage his readers, not to mention his “happy ending” as a married man, the writing journey was well worth it.

During the year and a half he spent writing The Flat Foot Story: From Professional Boxer to Building a Business, the only difficulties Max encountered arose from a busy schedule. Meeting his deadlines required commitment, which was tricky when he already balanced an active professional life and a diligent personal one as a husband with children. He didn’t want to let his group down by not finding enough time to finish The Book Professor® curriculum.

To truly succeed as an athlete, a boxer must be dedicated. That includes a consistent training regimen, respecting their coach, and learning to roll with the literal and figurative punches. Max had already applied that strategic discipline to his entrepreneurial efforts. In business, he always took the time to make informed decisions and foster a collaborative environment with his peers.

From boxing, to business, to books: in a perfect trifecta, Max realized the core tenets of discipline were also an essential part of the writing process.

This sentiment was especially true whenever Max felt tempted to give up on The Flat Foot Story. Everything he’d learned long ago in the boxing ring kept him steadfast, and in the end, he couldn’t argue with his instincts. “That voice in me was telling me, Max, you must share this story with the world,” he says. “You can’t give up, you must go, you must do it.”

Serving as a role model to small business owners was his calling. Max knew that highlighting his mistakes so other owners avoided repeating them, as well as imparting the encouragement to keep fighting, was too important to abandon. Max deeply hopes his learned wisdom will play a part in home-grown businesses achieving their goals smoothly and smartly while reviving South Africa’s economy in the process.

Another pillar of boxing and business is accountability. Without someone trustworthy to report to, quitting would have been too easy. Max credits Nancy and his Executive Writing Group for keeping him on track.

Employing what he calls a common South African phrase, Max laughs: “Writing a book is not for sissies!”

The Willingness to Learn

No author’s journey concludes when they submit their final draft. Max assumed that the publishing process was simple, but getting a book into stores – online or brick-and-mortar – is a team effort. Stonebrook Publishing, The Book Professor®’s sister company, oversees the ins-and-outs of ISBNs, cover and interior design, and distribution. Max gained immense insight thanks to the Stonebrook team.

In fact, Max is currently in the planning stages of his non-fiction follow-up. And when it comes to whether he’d work with Nancy again, there’s no question.

“Who else? You can’t be called a Book Professor® for nothing,” he says, and advises other first-time authors to invest in Nancy’s program if they want an outstanding, professional outcome. Specifically: “Don’t get your sister to edit your book,” he adds. Even if well-read friends and family do their best, editing is a skill with specific capabilities that come from experience. To any novice writers, Max suggests flexibility, an open mind, and a pragmatic attitude.

Furthermore, writers of any stripe should stay true to a committed work ethic. Any kind of project, whether sports, business, or creative, has roadblocks to conquer before the end result. The temptation to quit is one of those roadblocks and feels easy in the moment, but leaves ideas unrealized. As long as an author stays the course and has the right mentor, publishing isn’t a daunting, unachievable dream – it’s a certainty.

A Mentee Becomes a Mentor

The Flat Foot Story: From Professional Boxer to Building a Business was released on July 22nd and is available on Amazon. In the time since its debut, overseas buyers from the United States, United Kingdom, and Germany quickly contacted Max to congratulate him on his success.

The author himself, of course, is very excited. Although Max’s journey from a childhood in apartheid to a published writer was far from easy, the challenges he endured brought him to this accomplishment. And Max wants to make sure everyone knows how thankful he is for the support of everyone involved in The Book Professor® program, from cover designers to editors, and beyond.

“Thank you to The Book Professor® for guiding me in writing this book,” he shares. “From the bottom of my heart, myself and my family, we are very grateful.”

Do you think you can’t write a book because of your background? Are you not sure how to transform your life’s story into a published work? The Book Professor® will help you every step of the way. Let’s discuss how to bring your story to those who need it most. Contact us today!