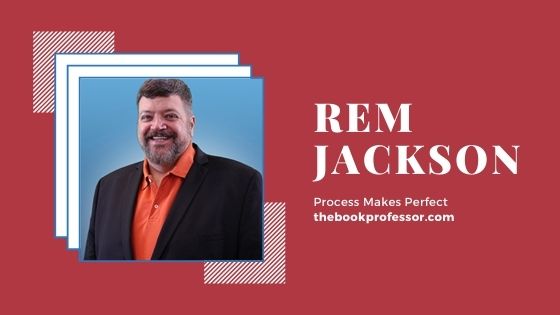 The Germination of a Book

In any business, marketing your services is critical, and in 2007, Rem Jackson created Top Practices—a company that helps podiatrists market their services. To teach them how to understand the foundations of marketing, Rem developed a rubric he calls “the four pillars of marketing” for medical professionals: online marketing, referral sources, internal marketing to existing patients, and external marketing to the broader community.

Top Practices was soon serving hundreds of podiatrists across North America, with some as far away as Australia.

Rem soon realized that solving one problem created another. As his client doctors found more patients and filled their waiting rooms, they needed stronger business management skills to handle the logistics.

When you go into podiatry, he said, “no one mentions that, by the way, you’re also going to be a business owner. So they’re accidental entrepreneurs.” Rem’s clients needed help with the business side of things, so Top Practices acquired two partners that specialize in that area.

Happy with his business and confident in his mastery of the podiatry marketing niche, Rem finally turned to an idea he’d been kicking around in his mind for years: maybe I should share my knowledge in a book.

“I’d wanted to write a book since forever, since 2005,” Rem said. “Doesn’t everybody think they have a book in them?” He realized that writing on a topic grants one a certain air of authority in that arena. After all, he points out, the word “author” is very close to the word “authority.”

Rem wanted to write a book, but in 15 years he’d never gotten around to it. After all, he was a responsible business owner with a large roster of clients. The prospect of getting all his knowledge out of his head and onto paper seemed daunting. He didn’t even know where to start. So, for over a decade, the book remained nothing more than a dream, until a chance encounter with The Book Professor® made it a reality.

Rem met Nancy Erickson at a conference for a marketing database software they both use. He and his wife Diane sat next to Nancy at an awards dinner. Diane and Nancy chatted for a time, then Diane turned to Rem and said, “This is Nancy. You need to talk to her.”

Rem was delighted to discover that Nancy helped people just like him write nonfiction books. She explained her process and he became interested in her one-on-one book coaching.

But Nancy sensed that Rem’s personality would thrive in the Executive Group Mastermind Course, where she gathers several authors into a common cohort as they work on their individual projects.

Rem, a mastermind leader himself, deferred to Nancy’s expertise. “I made a conscious decision to say, I’m going to listen to The Book Professor, because she knows,” he said. “I’m going to submit myself to the process.”

He showed up to the meetings as planned, albeit with some skepticism. Would his group members be helpful? Could he receive quality feedback and advice from writers who didn’t specialize in his subject matter? He soon grew interested in what other group members were writing about, and he saw their willingness to roll up their sleeves and help each other. He recognized the power of a writing group. So, he stuck with the process.

“And what I soon found out was, I didn’t know how to write a book. But Nancy does,” he said.

Freed by the Process

Rem credits Nancy’s process for pushing him past the 15-year “I’m too busy” slump. Her process also freed him from the paralysis of not knowing where to start.

Early in the course, Nancy gave him the secret to writing a first draft. She emphasized that all first drafts are lousy. First drafts don’t emerge from the brain as glowing prose on paper, Nancy said, and the sooner an author escapes that expectation, the sooner he or she will actually complete a draft.

“That freed me up,” Rem said. “I started to write what I thought was going to be a lousy book. I just wrote it, and I kept writing it.” He didn’t try to wordsmith every sentence. He just got the ideas onto paper and submitted new rounds of work to Nancy by the due dates. 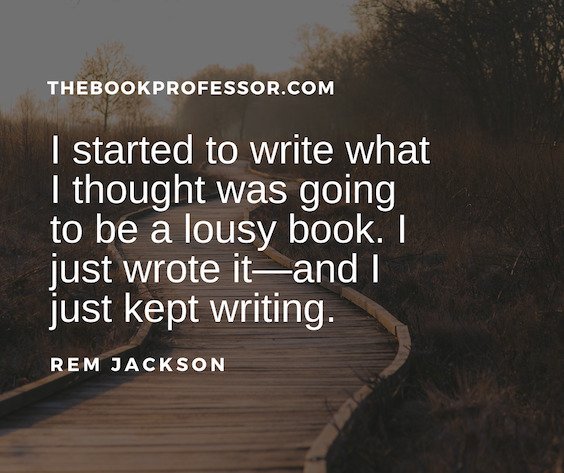 He expected scathing feedback, given how un-polished the draft was. But Nancy praised the work he’d produced. She wasn’t looking for perfection yet, just good content, and Jackson had delivered that by pushing perfectionism out of the way.

Only when the material was written and organized into a specific structure did Nancy coach Jackson to polish the prose. He did everything in his power to make the words shine, but still worried it didn’t sound “good enough.” Regardless, he turned it in for Nancy to edit.

“And when it came back,” Rem said, “I thought, This sounds like me. These are my words. I wrote this, but it’s so much better than before. And it was wonderful.”

The deadlines helped too. Nancy’s strategy of weekly time blocking—regular hours set aside to focus on the book—helped Rem to overcome his busy schedule and produce a manuscript little by little. He found Nancy’s weekly curriculum on writing to be interesting, inspirational, and most importantly, bite-sized. To fit his schedule, each lesson and assignment had to be clear and short. The Book Professor’s® weekly curriculum met that need.

The process built the steps intuitively, Jackson said. He began with a structure, then a BookMAP, and then came the heavy lifting: he wrote the actual text. Although time-consuming, that part proved easier than he thought thanks to the BookMAPs Nancy encouraged him to complete first.

The Book Professor’s® process gave Rem yet another gift: it helped him identify original content he’d already produced for his business that should be included in his book.

He’d first planned for his book to explore the inner struggles common to most people, even outwardly successful and high-powered people like medical professionals. Nancy helped him realize that he should also write about the four pillars of marketing. He had, after all, developed this completely original content for Top Practices. 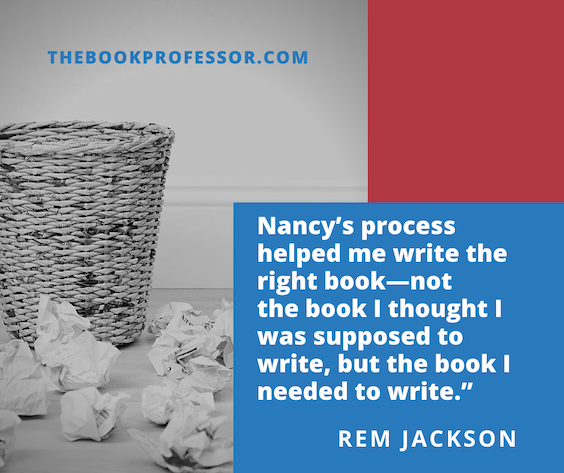 Of course, the adjustment in subject matter called for a new title. Rem’s cohorts in the mastermind suggested Podiatry Prosperity as a title, an idea that encompassed both the prosperity that comes from strong marketing and the metaphorical prosperity of a well-ordered inner life. It tied the book’s main ideas together.

Rem also loved that the title included the word podiatry. “In my business, I serve podiatrists. I don’t want them to wonder whether if this book is for them,” he said. “I wanted it to be obvious.”

A Book Can Be Your Business Card

Thanks to The Book Professor®, Rem Jackson wrote a book he feels proud of. He’s seen contemporaries cobble together manuscripts out of recycled blog posts and lectures, but he wanted a book comprised of strong, new material. “I wasn’t trying to take a shortcut,” he said. “I was trying to write a book that I was proud of and that my children and grandchildren could read.”

Plus, it granted him an authority in his field that all professionals aspire to. “It’s the best business card you can have. It raises your level of authority in whatever market you’re in. You’re a published author! It’s fun to say that.”

Rem says he’s used the book to successfully grow the Top Practice brand. It helps him stay top-of-mind in the industry. The book is an excellent teaching tool for podiatrists who are interested in his services, and all his clients receive a copy as a perk. 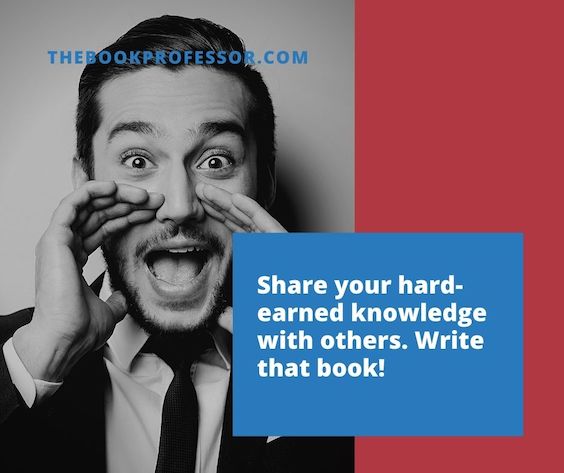 The book birthed several other creative endeavors as well. One chapter, titled “Your Inner Six-Year-Old,” examined people’s tendency to criticize themselves and suggested that they instead talk to themselves as they would talk to their six-year-old selves—with love, respect, and patience.

Rem’s daughter, an illustrator, designed a children’s book based on that concept, which Rem and The Book Professor® are in the process of publishing as a short standalone book.

His first book’s title, Podiatry Prosperty, also prompted Rem to reflect on the meaning of the word “prosperity.” It piqued his interest to such a degree that he began a podcast, Prosperity and Something Greater, to explore how successful people define prosperity. He even hosted Nancy on one episode.

When Writing, Trust the Expert

Rem encourages anyone who thinks they have a book inside them to go for it. If you have an idea or a topic that will lift people up, help them, or possibly even save lives, then he believes it’s your responsibility to get that message out.

But, he says, a word of caution: turn to an expert like The Book Professor® rather than try to go it alone.

He realized early on in the process with Nancy that, “you don’t actually know how to do this, or you would have already done it.” But by following The Book Professor’s® process, he ended up with the book he wanted. 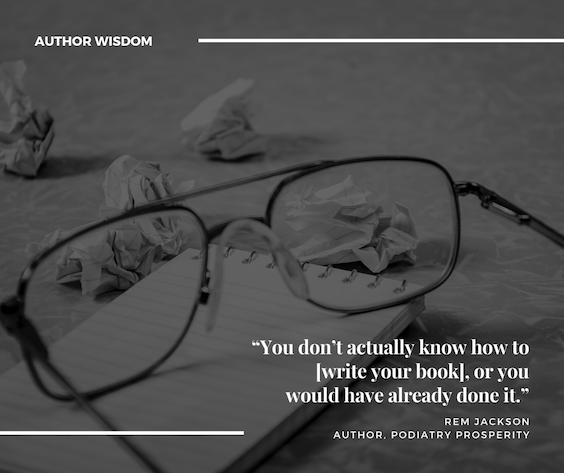 Write the Book You Want to Write

Are you like Rem Jackson? Maybe you have a great book idea but don’t know where to start, or you fear you don’t have time to complete the project. And yet, you feel a responsibility to get your message out.

The Book Professor® can help. Our mastermindss and one-on-one coaching can turn you from an aspiring author to an accomplished author and get your message out to the world. Contact me today and let’s get started!