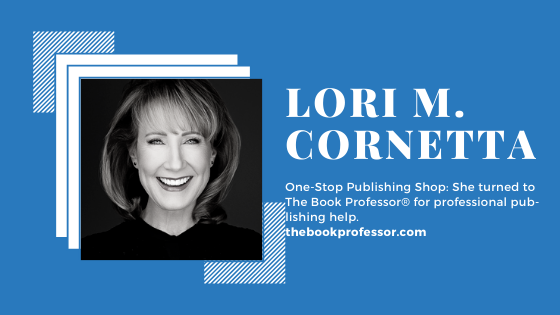 Lori Cornetta enjoyed a long career in a field often considered “a man’s world”—sales. She worked for many years as a successful saleswoman in broadcast and then medical device sales.

At times, she was told she wouldn’t make it in sales or make it as a female sales representative. Even when she proved her naysayers wrong by excelling, she distinctly remembers a man, who she had been interviewed by said, “I heard you’re doing well. None of us thought you’d make it.”

“I loved sales from a young age,” Lori remembers. “I just kept at it and I ended up being extremely successful, eventually earning a six figure income in medical device sales.” Eventually, she became a sales coach to gain more control over her own schedule. For two decades, she has trained countless successful individuals in the sales industry, and expanded her coaching to realtors, business owners, financial advisors, entrepreneurs, CEOs, VPs, and more.

Lori knows how difficult and challenging a career in sales can be. She believes that women are better equipped to handle the challenges inherent in a sales career, but aren’t told that they have this ability. Additionally, many women don’t even put  a career in sales on their radar. Lori wanted to change that perception. She knows women are psychologically suited to be great in sales as long as they possess the motivation, drive, and attitude to succeed.

Lori shared her story and her advice at speaking engagements with companies and sales organizations. She began to hear a familiar refrain: “You should write a book!”

Of course, jokes Lori, this advice never came from anyone who had actually written a book themselves and knew how difficult the process was. Nevertheless, after hearing the advice multiple times, she took it to heart. Lori decided to write a book that would inspire more women to get into sales career or keep selling even if they were going through a difficult time.  She wanted today’s future saleswomen or current saleswomen to learn from her own experiences.

“I want to get more women into sales,” she says. Lori believes that the gifts women are often credited with in our culture, such as insightfulness, “reading the room,” interpersonal skills, and building rapport, make them perfect salespeople—but bafflingly, she says, most of the sales world doesn’t make that connection, and sales remains a heavily male-slanted industry. She knows this is the case for positions of corporate leadership across many industries, despite the fact that just as many women as men have extraordinary leadership gifts.

Lori set out to write a book that would offer advice and tell stories from her own career. Little did she know she’d be at it for four years before finally crossing the finish line with The Book Professor’s help.

Lori decided that her book would tell stories from her own career in order to show readers what works and what mistakes to avoid. She insists that she learned as much from her mistakes as from her triumphs, and she wants other women to learn from them as well. As Lori wrote her manuscript, she included plenty of stories from her own life, as well as hefty doses of ideas, recommendations, tools, and other strategies women can use to boost their career success.

She worked on her book when she had time, which is to say, sporadically. Some months she squeezed in writing time; some months she didn’t. By the time the manuscript was finished, Lori had been working in fits and starts for four whole years.

Finished at last! She sent her book through a round of developmental edits, but then faced the task of finding a high-quality professional editor to get it market-ready, as well as a cover artist, layout designer, publishing company, and more.

As Lori learned how much help she would need, she got the sinking feeling that she was in over her head. She didn’t know the writing industry well; how could she possibly vet all the different professionals she’d need to work with? She met a few candidates who seemed to lack integrity. The way forward seemed daunting.

“It took one conversation with Nancy, and I was sold,” Lori says. The Book Professor® struck her as reputable, professional, and efficient. Best of all, it was a one-stop shop for everything she needed.

Editing from The Book Professor® got Lori’s book polished to perfection and ready to meet the most rigorous of publishing standards.

Then it was on to the publishing phase. Lori still found the process challenging, but this time, she had experts she trusted guiding her through it. The Stonebrook Publishing team offered Lori choices on things like cover art and layout, and Lori thought the choices given were tasteful and professional. She was relieved when decisions were made, the book was off to the printer, and she had a release date.

Lori’s book Stealth Sales Secrets was published in July 2021. In the short time since its debut, Lori has already heard for enthusiastic readers. “The support has been overwhelming,” she says. “I plan on using [the book] to get more speaking opportunities and also more one-on-one sales coaching work.” She can also offer her book as a resource to her current clients.

Lori is happy to have a book to showcase her expertise. She says that, while she’s been an expert in her field for decades, having a book elevates her status in the minds of others. It’s a demonstration of her knowledge that makes her even more credible as an authority. For someone who’s made a living building confidence in others about her product, that kind of trust is priceless.

In retrospect, Lori has only one regret about the experience of authoring a book.

“Had I known about The Book Professor®, I would have gotten them involved earlier on.” She knows the initial manuscript would not have taken four years to write if she’d completed it as part of The Book Professor’s program, which guides authors toward efficiency in their writing process.

Nevertheless, it’s hard to have too many regrets. Lori has written the book she needed when she was just starting out or when she was going through difficult times, and now a generation of women in sales will have a resource to help them achieve their dreams.

Do You Have a Book?

Would writing a book boost your credibility within your industry? Maybe you’d like today’s up-and-coming leaders to benefit from the lessons you’ve learned. Contact The Book Professor® today to explore our writing coaching and publishing options.

We work with business leaders and entrepreneurs across many fields, as well as memoirists and others who have an important message to share.

We can’t wait to hear from you and talk about your book idea!