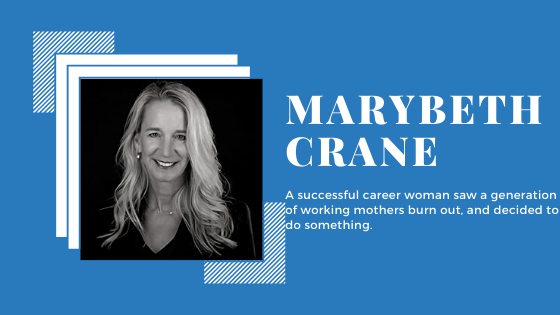 A successful career woman saw a generation of working mothers burn out, and decided to do something.

When Dr. Marybeth Crane, successful podiatrist, was neck-deep in the stress of raising three kids and running a booming business, she never suspected that the stress would one day inspire a book.

Marybeth was not just a podiatrist. She was one of the most popular sports medicine podiatrists in the region. Her practice, Foot and Ankle Associates of North Texas, was a one-stop shop for athletic foot health, with preventive care, treatment, and surgery all available. Her waiting room was a revolving door of runners, student athletes and the like.

For decades, Marybeth treated this large roster of clients at work while being a wife, household manager, and mother of three at home. She felt she should be able to do everything—work long hours, do the laundry, make the dinners, pick the kids up from school, and manage the other daily logistics of a home. Her own mother had been an exceptional full-time homemaker, but also encouraged Marybeth to chase the most ambitious of dreams. As an adult, Marybeth naturally tried to emulate her mother and be a career woman at the same time. It wasn’t working.

By the time she hit 50, Marybeth was suffering from adrenal fatigue and stress-induced heart palpitations. It began to dawn on her that constant, intense stress was neither normal nor healthy. So, she made the difficult decision to retire early. At age 52, Marybeth left her thriving practice in the capable hands of others.

Retiring early drew questions from friends and family. As Marybeth tried to explain how overwhelmed she felt, she was hit with a realization: as a woman, she had been empowered to chase her dreams but not given the tools to build a balanced life. She felt an unspoken expectation to conquer the world at work without falling short of full-time homemaking standards. She needed help to do both, but asking for assistance felt like failure.

Marybeth talked to other women and began to suspect that an entire generation of working mothers had fallen into the same trap. They felt guilty for “failing” to do everything at once.

What was so bad about asking for help, Marybeth now wondered? Why couldn’t she ask her husband and children to shoulder more domestic work? Why had she tackled administrative tasks at the office that her staff could have handled? Why did she resist the idea of a grandparent or friend picking up the kids from school?

Why was she trying to be Superwoman?

From Blog to Book: Not So Easy

Marybeth’s story hit a nerve with many of her friends and colleagues, who urged Marybeth to share her observations with a broader audience. She began blogging on the subject, exploring the ways in which working women feel obligated to be everything to everybody, and how they might deconstruct this burdensome belief. Once she had a raft of material, it became clear that she had the makings of a book on her hands.

But writing a book isn’t as simple as smashing a batch of blog posts together and slapping a cover on top.

“I had about 80 percent of the content, but I didn’t know how to put it all together,” Marybeth says. She worried her book would feel scattered and unfocused. So, Marybeth turned to The Book Professor® to help her transform a year of blog material into one cohesive manuscript. She joined a Group MASTERMIND cohort and set to work.

“Writing with a book coach helped me put all of the stories together, because the book is not linear,” Marybeth says. Rather than tell the story of her burnout from start to finish, each chapter covers a specific topic and how it played out in her life.

The Book Professor’s approach worked well for Marybeth. She focused on one chapter at a time and had to show up to her weekly cohort meetings with a small section of work completed. This cut down on overwhelm and the urge to procrastinate. Before Marybeth knew it, her ideas were beginning to fall together and she had the start of a solid first draft.

Marybeth had raised an eyebrow at The Book Professor’s year-long timeline for completing the book. That felt too long, she thought. Soon, however, it became evident why she needed to take time with her manuscript. “I realized I needed that time to mature the story and think about what I was writing…using the MASTERMIND group to mature the story helped immensely,” Marybeth says.

The cohort also helped Marybeth share more authentically from her life story. The Superwoman instinct was still strong, and Marybeth resisted being honest about the extent of her overwhelm. Her writing cohort helped convince her that being transparent with your audience is okay. She needed to show some of her vulnerability so readers would connect to her story.

This was especially helpful since Marybeth was used to writing in dry, scientific terms as a medical professional. Writing a nonfiction book required a more relatable tone and the willingness to tell even uncomfortable stories.

Diamond in the Rough

Marybeth ended the rough draft phase feeling that her manuscript was very rough indeed. She soon discovered, however, that when you begin to massage and polish a first draft, the beauty of the story shines through. Guided by the experienced eye of a professional editor from The Book Professor®, Marybeth turned that rough draft into a manuscript to be proud of.

“It wasn’t easy, but it was guided,” she says in retrospect. “The Book Professor® empowers you to get your voice out there. Even with the editing and back-and-forth critique, the book never lost my voice.”

For the Next Generation

Marybeth’s book Drop the S: Recovering from Superwoman Syndromeuses her own story to suggest how other women can reclaim balance in their lives.

“The number one thing is to raise your hand and say you’re not okay,” Marybeth says. The book encourages women to have frank conversations with partners, coworkers, and bosses about what they need in order to manage their lives. That may mean upending unspoken assumptions about what wives and husbands are each responsible for in a heterosexual marriage. It may mean pushing back against unrealistic expectations at work, or making less money in the long run. It may mean accepting that you can’t be (and don’t need to be!) June Cleaver at home, no matter how easy your own mother made it look. Marybeth believes women should start having these conversations in their 20s, when work is ramping up and patterns at home are being established.

No one helped her open these conversations in her own life, so she is determined to help the next generation of women.

“When I got the final copy of my book, I was amazed,” Marybeth says. She couldn’t believe she had written this helpful, polished, professional book, but there it was in her hands.

The reaction from readers was equally enthusiastic. Marybeth sent advance copies to a few people, mostly professional women. They each saw their own experience mirrored in the book and said that they felt less alone after reading it. Once the book released to the public in August 2021, it quickly garnered positive Amazon reviews, especially from other women in the medical field. Marybeth also used the book to facilitate three book clubs.

“The message resonates with people—mostly women between the ages of 35 and 55,” she says.

What Does the Next Generation Need From You?

“When I look back, I’m so glad that I chose to use a book coach, because I think my writing going forward is going to be better,” Marybeth says. She couldn’t be more pleased with the finished product, or with the way it is helping a new generation of working women.

Do you dream of one day writing a book you can be this proud about? What does the next generation need to hear from you? Guidance from The Book Professor® can help you spread the message far and wide. Contact us today to see how we can help.