Learning to Give Back Through Grief 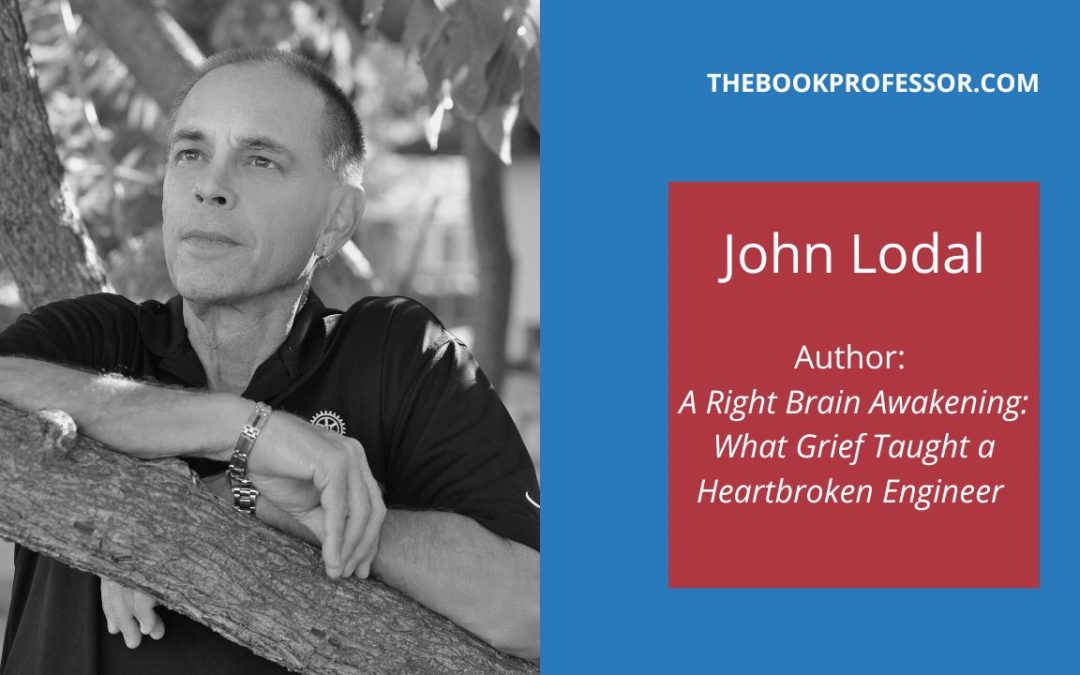 A former “left-brain” engineer discovered his capacity for empathy after a devastating loss. Now, he lives to serve other grievers.

John Lodal was always a left-brained type of man. The longstanding right-brain vs. left-brain theory posits that individuals who favor facts, mathematics, and logic are more aligned with the left hemisphere of their brain. Right-brain individuals, comparatively, usually prefer creativity and the arts and are more attuned to their emotions. That rationale certainly held true for John. He graduated from the University of Illinois in 1980, accepted a standing offer from Hewlett Packard as an engineer, and married the great love of his life, Pam. He solved problems as a job and enjoyed doing so.

When it came to right-brain characteristics, however, John fared less well. He wouldn’t consider his past self a rude or cruel man, but empathy was never his strongest suit.

After almost forty years of marriage and a fight with cancer, Pam, John’s beloved wife, passed away in October 2019. During the intervening three years, John realized he didn’t have the psychological tools necessary to handle such an unbearable loss. In his words, the “mental circuit breakers in my mind blew open.” He was “screaming at the walls” in his devastation, and questioned his lifelong faith and his friendships.

Eight months after Pam’s passing, John realized part of him had died alongside her. He could never again be the man he was. Who was this new John? Was it possible for him to move forward in this tragedy, but not move on? He spoke with a grief counselor, read books on the topic, and began journaling through his mourning. To his shock, he also wrote poems and discovered an inner empathy he didn’t know existed. After these changes, John knew he needed to develop these right-brain skills and achieve a mental balance between these new aspects of his identity and his accustomed left-brained ways. He once relied on calculations and logic, but without the proper tools and understanding, his overwhelming sorrow would consume him.

The many grief books John read were excellent, but the majority were written by women or male psychologists. No guidance existed for someone on his specific journey. Gender expectations around male grief were especially lacking. Through his own anguish, John saw there was a “comprehensive grief illiteracy” in American culture. Many Americans consider death the enemy and something to be fought to the last breath, yet expect those surviving the loss of a loved one to recover within months.

John will never “recover” from losing his wife of thirty-nine years; grief is now irrevocably grafted onto his story. But for the rest of his time on Earth, John wanted to serve other grievers. If he wrote a book, could he fill the cultural vacuum he saw? Could he teach the skills he’d learned and leave a positive impact on others’ lives? There was no way to know. But as a lifelong Christian and son of a Methodist minister, John answered a need.

The old John was gone, but he could decide who the new John might be.

John met Nancy Erickson, The Book Professor®, through his friend and published author Jan Salisbury (Leaders Who Coach: The Roadmap to Unleashing Team Genius, Stonebrook Publishing). Nancy understood the nature of left-brain thinking, something absolutely essential to John in his search for a professional editor. They had to grasp his distinct experiences, outlook, and goal of writing a book. His objective was to do the best he could and supplement his lack of knowledge with guidance.

Nancy met John exactly where he was. She taught him best writing practices and proven techniques, and she championed him; it was paramount they have fun assembling his manuscript. One of the tools John relied upon most was seeking gratitude in the present moment, and applying those convictions to his writing made the entire process enjoyable.

Six weeks after they started, John had written 40,000 words. Ten months later on November 28th, The Book Professor®’s sister company Stonebook Publishing released A Right Brain Awakening: What Grief Taught a Heartbroken Engineer. “Holding your book for the first time – holy, that’s something,” says John. He still considers himself left-brained when examining the deliverable: this is a product he’s immensely proud of. But the right hemisphere he’s learned to nurture thanks God for merging Nancy’s path with his. Surrounding himself with people of high character who care about others is a new priority in his life, and Nancy demonstrated that caliber of personality. Every step she took with A Right Brain Awakening was on his behalf. She ensured his vision was realized into a book that, in turn, might help others in John’s situation.

A Masculine Way to Grieve

It’s sufficient to say that writing poetry was a mini-epiphany for John. He shared some of his work online through Caring Bridge, a non-profit charity that facilitates easy communication between patients, family, friends, and caregivers. As such, creating a book draft was a matter of revisiting his existing work. As he and Nancy adjusted his experiences into a streamlined BookMAP, John learned how to become a storyteller. The muse landed on his shoulder, and with Nancy at his side, he wrote and wrote.

Initially, John was apprehensive about the editing process. He didn’t want to lose his voice, but they struck the perfect balance between a technically excellent manuscript and remaining true to John’s heartfelt vision. Nancy’s extensive knowledge pinpointed where John’s work was redundant or needed refining. He thanks her for taking his best interests to heart both as a person and a debut author.

One of John’s primary motivations in writing A Right Brain Awakening was identifying a masculine way to grieve. Suppressing emotion is hard-wired into American men’s psyche, and John says he wanted to evolve his gender out of those constraints. Maybe other men would connect with “this knucklehead” finding a way to move forward by embracing his emotions and follow his example.

Having said that, John wholeheartedly believes his story can speak to a griever of any gender. He can’t deny he hopes it becomes a dog-eared book that improves lives, but he doesn’t want to lean into hubris. “I daydream of being interviewed on Good Morning America,” he laughs, but fame isn’t why he sought out Nancy. What matters is seeking gratitude and practicing kindness to himself and others.

Creating A Right Brain Awakening meant showing great vulnerability. John cites that as another stumbling block for most men, but a good storyteller has to engage their readers. John needed to tell them how broken he was to describe a realistic path forward. The best books contain something that leaves the reader improved, and that requires an open heart – and, in John’s case, an awakened right brain.

Despite being a first-time author, he didn’t feel much fear. From day one, Nancy was “the bullseye,” as he puts it. Not only did she accept and protect his goals, but she also championed his book as much as his heart did. She removed quite a few quotation marks from his first manuscript, he says wryly, but he has no complaints. Nancy was a powerful mentor at a crucial point in his life.

For first-time writers, John’s advice is to practice mindfulness. Being present in the moment helps to calm anxiety and narrow focus. Have patience, keep daydreaming, and think about how to translate those daydreams into words. And once the inspiration descends, run to a laptop and write, write, write.

A Step on the Journey

Over the past three years, John found two metaphors for grief: a journey and a puzzle. Each person’s grieving process is unique. A Right Brain Awakening can help them identify their puzzle pieces and start their journeys. For example, continuing to live with loss isn’t always about acceptance. John doesn’t believe he will ever accept Pam’s death, but he is adapting. Part of him will always lead with his head before letting those impulses trickle down to his heart, but he looks forward to learning how to best serve the world through his new outlook.

John also distinguishes between pain and suffering. Suffering manifests as temporary ailments like not eating or sleeping well, whereas pain never leaves. Rather than try to ignore it, John advises welcoming pain inside. The tactic proved effective for him because the more light he shined on pain, the more truths John learned about himself and the grieving experience.

Pam’s 66th birthday was the same day A Right Brain Awakening was published. John began his journey with The Book Professor® just hoping to write the best he could. He’s confident he did. The final product is substantive within and without, and he’s grateful to everyone who helped him on this journey. His memories with Pam and holding a tangible book in his hands are moments John wants to cherish.

Giving Back Through Love

As a preacher’s son, John knows one doesn’t earn their way into heaven with works. Serving the community, serving the Earth, or serving in the soup kitchen, is how John says “thank you” for God’s boundless, infinite love. He never imagined writing a book would be part of that recognition, and he never conceived of a life without Pam. A Right Brain Awakening: What Grief Taught a Heartbroken Engineer is part of his thankfulness and his attempts to leave the world better than he found it.

Taking stock of his life, John says, “I’m a lucky guy.” He misses Pam desperately, but his story isn’t done. He just can’t see God’s full picture. He knows Pam is somewhere she’s needed more, and she’s saving a spot for him; he will see her again. Until then, John Lodal, a heartbroken left-brain engineer, moves forward.