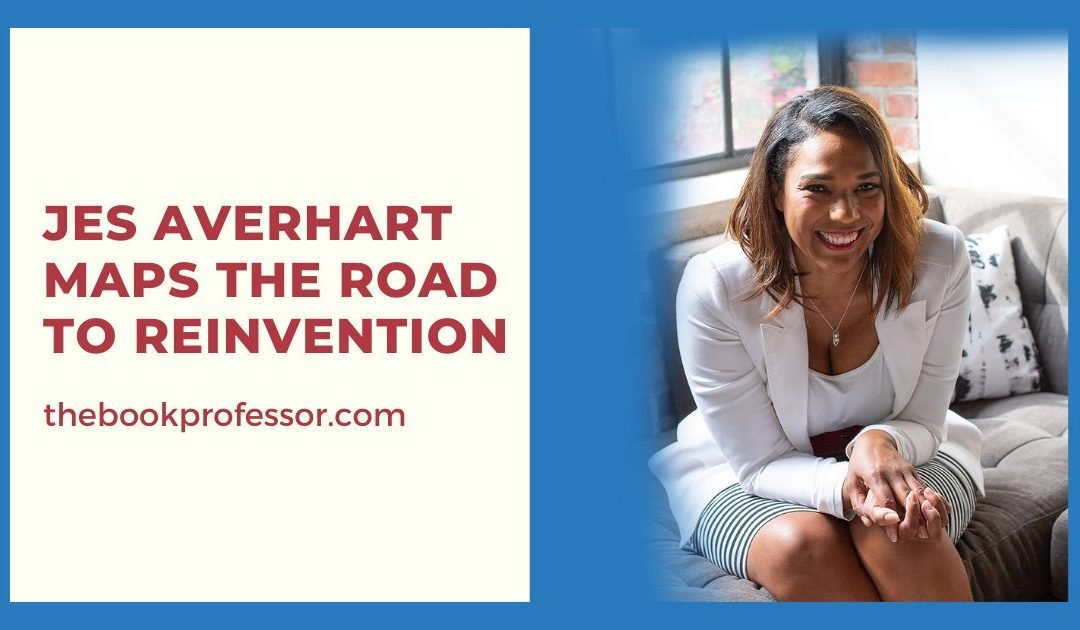 The Book Professor® helped her ditch perfectionism, treat writing like a business, and finish two books.

To Jes Averhart, reinventing oneself is an art.

Following a career in the business and nonprofit sectors, Averhart founded Reinvention Roadmap, an initiative that explores stories of self-reinvention undertaken by women from all walks of life. Reinvention, says Averhart, usually follows a large change in life, such as marriage or divorce, a birth or a death, career changes, illness, and many more.

Averhart explores these reinvention stories through a newsletter, podcast, and soon, a book.

Tentatively titled Out of the Crucible, Averhart’s book will explore the process of reinvention she’s experienced in her own life and offer readers insight on how to do the same.

Averhart didn’t begin Reinvention Roadmap with an intent to write a book. But nudges from friends and a serendipitous meeting with the founder of The Book Professor® took her glimmer of an idea to reality.

A Story Worth Sharing

Averhart says she’s faced many “crucible moments”—moments that forced her to reimagine her life going forward. Many of these moments centered on her quest to learn about her birth father. When friends and loved ones urged her to write down her story and her ideas, she realized her story might have broad appeal.

But Averhart needed professional help to get the project off the ground. She met The Book Professor® founder Nancy Erickson through a mutual friend at a conference and decided to try the Executive Group MASTERMIND course.

“That book has been living in my brain for a while, and probably would still be there if it wasn’t for people like Nancy,” Averhart says.

Through the structure of the Executive Group MASTERMIND program, Averhart overcame the belief that she was “too busy” to write. A robust BookMAPPING process and a schedule of bite-sized writing assignments got Averhart to a solid manuscript.

Part memoir and part self-help, Out of the Crucible uses Averhart’s own story to demonstrate how even unwelcome life events can spark positive change. She reveals lessons for reinvention that any reader can apply to his or her own life.

Averhart chose to share her personal story because she believes that all reinvention boils down to personal reasons—even the reinventions that appear practical, like a career change.

When she began to collect others’ stories through Reinvention Roadmap, this truth jumped out at her. Many interview subjects began with descriptions of the external changes they made in their lives. They switched jobs, turned a hobby into a full-time passion, etc. But inevitably, as the conversations went on, they veered into the personal realm. Life’s most earth-moving moments in family, relationships, and health often spurred changes that appeared surface-level to others.

Because such “crucible moments” are universal to the human experience, Averhart believes there’s a huge market for stories of reinvention. “People want to feel like there’s hope, and I think the idea of reinventing yourself holds promise,” she says. “Nobody wants to feel stuck.”

Averhart says of The Book Professor®, “It’s frankly the only way I would have gotten this book done.”

The Executive Group MASTERMIND brought needed discipline to Averhart’s writing process. It gave her permission to prioritize writing time; before, she’d pushed writing to the back burner behind everything else in her busy life. Averhart remarks that it’s easy to imagine writing a book, but another thing to sit down and do it.

The Book Professor® also freed her from a perfectionism that had overwhelmed her past writing attempts. Averhart had always been a slow writer. She started at the beginning and tried to work through in order to the end. She wanted every word to be perfect and berated herself for less-than-stellar first attempts.

The Book Professor® encouraged her to just get a draft on paper, even a bad first draft. Averhart found it easier to write a bad draft and fix it later than to write one pristine draft from start to finish. And as her completed material increased, so did her motivation. It’s easier to give up on a project when you have little to show for your effort, she says, so cranking out content kept her enthused and helped her continue on rough days.

The structure of her story became stronger as well. Before The Book Professor®, Averhart wrote with a vague idea of her book’s structure but no plan. The Executive Group MASTERMIND made her rethink that approach. “You’ve got to treat writing a book almost like a business model,” Averhart explains. “Follow a plan. If you can do that, you can get the book done faster.”

She used The Book Professor’s template specific to memoir writing, and her draft came together.

A Little Help from My Friends

In difficult moments, Averhart’s cohorts in the Executive Group MASTERMIND program buoyed her spirits. She watched other writers struggle sometimes, too, and realized that struggle is common to writers. Suddenly, it felt less threatening to admit she couldn’t write perfectly. Neither could anyone else!

Averhart benefitted from her cohort’s encouragement and offered her own encouragement to others. She experienced the cohort environment as a place to build others up. No one tore each other down in competition. And although Averhart was the only memoirist in her group, she never felt left out. The other writers showed interest in her genre, and she found herself interested in their topics as well. The group felt like a win for every member, she says.

Averhart’s goal for Out of the Crucible is “to inspire the new Americana woman to understand her crucible moments in a way that is transformative.” She hopes her story will prove that anyone can achieve personal transformation and create favorable outcomes from hard times.

Averhart hopes to release the book at the start of an ambitious new project. She’s planning a six-month road trip in 2022 in which she will travel the U.S. interviewing women who have reinvented themselves. So far, her planned interview subjects include women in executive roles, in the sports and entertainment worlds, and running start-ups, but her list is still growing.

Before that book release, however, Averhart will release another book completed with The Book Professor’s help.

She and coauthor Teresa Zimmerman recently completed a manuscript titled Oh Lords! The book examines the dating world of modern women through the lens of Averhart’s and Zimmerman’s own dating experiences. They unpack the different qualities of potential partners and bad boys to offer a roadmap of the dating highs and pitfalls young women may face. Like Out of the Crucible, Averhart hopes Oh Lords! will inspire young women to take control of their lives.

“We want women to enjoy the [dating] journey, but we also want them to see the pitfalls and learn from our mistakes,” Averhart explains.

The book will be released in 2021 through Stonebrook Publishing.

What Are You Waiting For?

If you’ve considered writing a book, Jes Averhart has some advice for you: life is short. Go for it, and don’t waste time with false starts. Partner with The Book Professor® to get it done in good time.

“It is very difficult to write a book on your own,” she says, particularly for busy professionals. “There’s absolutely no way I would have written two books” without The Book Professor®.

If you have a book or two just waiting to be written, contact The Book Professor® today and let’s get started!