How to Write a Nonfiction Book When It Hurts 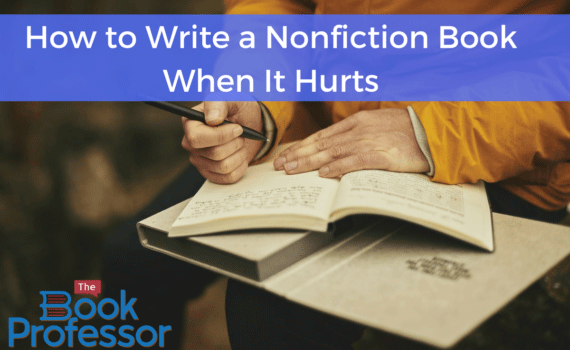 This year, our focus is to find 117 Solutions to our most difficult problems, an effort we call 117 Solutions in 2017. I’m encouraged by the response we’ve had, but I also feel humbled when I’m asked how to write an inspirational nonfiction book when it hurts. Not all stories are pretty, especially those about child abuse.

Sean Carney is one of my heroes. He’s a big, burly man, tough in a kind-hearted way, and he has the kind of laugh that would get you in trouble at church. Deeply generous, Sean lives large, and he shares his blessings

with everyone around him. He should have died when he was 20.

Sean wasn’t sick, but he grew up in a sick environment that was punctuated by regular incidents of the worst kind of child abuse, inflicted on him by his uncle. The son of a violent father and a depressed-to-the-point-of-being-disabled mother, he had to take the family reins when he was just twelve years old, getting his brothers up for school and cooking their dinner at night. It’s no wonder he became angry and violent, and at 13 he started using drugs: pot, PCP, crystal meth, alcohol, cocaine, and heroin. At 17 he became a father. By the time he was twenty, he was on the needle. Even though he drank and drugged, he could not escape the PTSD from the sexual abuse.

Sometimes you can’t tell when children are in trouble. Sean’s family looked like the richest people in town. He was an All-Star in Little League and hockey, he played army, went to the beach and played in the woods, and he was even a track star. He looked like the run of the mill mid-western kid, but Sean had a secret that burned a hole inside him. His rage was always just under the surface, and it frequently exploded.

A business owner since he was 17, by the time he was 20, despite his drug use, Sean’s strong work ethic made him a phenomenal success. But inside his head, the abuse still tormented him. He was full of self-loathing and felt he was never good enough. Angry to the point of planning his uncle’s murder, he was a loose cannon. How could he feel any different? Look what happened to him.

But that’s not the end of the story. Sean turned his life around, and he is writing an inspirational nonfiction book that will encourage other down-and-outers and show them that they can turn their lives around, too.

The purpose of Sean’s book is to show people who have lost faith in themselves and feel hopeless about their future, that no matter what’s happened to them or what they’ve done, that they don’t have to be defined by their past but can be prepared by it to live out their unique purpose and become the person they were truly meant to be.

There are over 27,000 reported cases of child abuse every year, but how many more don’t get reported? Hundreds of thousands of adults carry those scars, and I’m grateful that Sean Carney  stepped up to tell his story and offer hope and help to others. Living with the after-effects of child abuse is a problem, and Sean offers a solution. His inspirational nonfiction book may be painful to write, but it will be the voice of hope and help to those who have suffered similar situations.

How about you? What do you know, what have you been through, what have you discovered or developed that can help others? What inspirational nonfiction book could you write that will bring hope to others? Please join us in our effort to find 117 Solutions in 2017!