If Not Now, When? 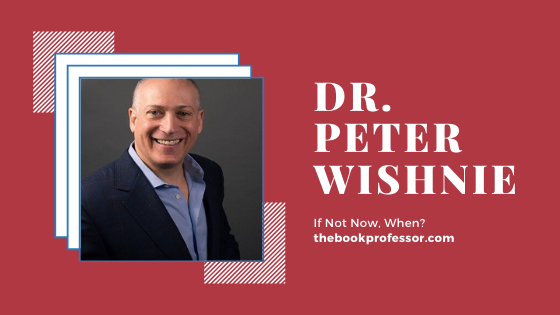 A Busy Professional Finds the Time, Busts the Myths, and Learns the Tricks of Writing a Book

Dr. Peter Wishnie, D.P.M. assumed there would always be time to write a book—later.

A busy podiatrist and practice management consultant, Dr. Wishnie knew podiatrists needed a “how-to” management book to help them treat their practices more like businesses. They needed to understand how to hire the right employees, how to train them, and how to deliver amazing customer service.

Wishnie himself had needed such a book when he started his practice years earlier, but because there were no books written for podiatrists, he was forced to turn to practice management books from dentists, chiropracters, and others. He knew what business advice podiatrists needed and how to explain business concepts to someone trained in medicine.

Dr. Wishnie saw the need. He had the knowledge. What he didn’t have: time to write.

Wishnie reflected on the years he’d spent putting off his book idea, and asked himself, “If not now, when?” He began The Book Professor’s Executive Group Mastermind course.

“A lot of people have goals, but we get sidetracked easily because life is busy,” Wishnie says. He already understood the value of accountability. He had previously employed a personal trainer, a life coach, and a branding coach. He knew the encouragement of a teacher made him a better worker, and the prospect of disappointing that teacher was stronger motivation than his own willpower.

It helped to have a skilled and personable coach like Nancy Erickson. “Nancy is an amazing teacher of writing,” Wishnie says. “She has that patient personality. She can critique your work without making you feel bad.” When Nancy offered feedback and suggestions on Wishnie’s book, he always walked away feeling encouraged. Most people, he says, don’t have that kind of knack for constructive criticism.

Daily wordcount goals were critical to his progress. He aimed for 500 words each day, even if he had to write them just before bed. It met his need for accountability without placing large demands on his time.

The Book Professor® also helped Wishnie see that organization, not sporadic inspiration, is the fuel behind good writing.

“People think you need to have the perfect idea, or the perfect writing style, or that you have to be great at telling stories,” he says. Nancy, however, told Wishnie to start with a list of ideas for the book. Once he had the ideas on paper, he and Nancy put them in order and saw the structure of his narrative come together. Some topics that he assumed belonged together needed to be separated. Some topics emerged for the first time as he collected ideas. He grasped how to connect the ideas and transition between them.

Next, Wishnie and Nancy laid out the book’s intended chapters. Nancy showed him that his book was a problem/solution story: this is the problem I faced, this is how it affected me, this is how I solved it. “Then you tell anecdotes along the way about those problems,” Wishnie explains. Nancy coached him to turn each “problem” into its own chapter.

Wishnie also learned not to blame writer’s block when he struggled to get the words onto paper (or computer screen). When he felt stuck, his lack of organization was more often to blame than a lack of words. For example, he found it easier to start a chapter when he knew what topic would be the focus of the whole chapter.

Wishnie started out in the Executive Group Mastermind course. He enjoyed the feedback from other aspiring authors and enjoyed hearing their stories. This reassured him that everyone, himself included, had a story with the potential to hold a reader’s interest.

But he already knew his specific topic and angle, while some of his cohorts were in the early stages of idea development. Wishnie needed a brisker pace, so he switched to the 1-2-1 coaching format. This allowed him to write at his own speed. “Write down ideas and clean it up later” is his motto, a philosophy The Book Professor® shares.

“I Had Tears in My Eyes”

Wishnie finished the rough draft, polished subsequent drafts to perfection, and titled his book The Podiatry  Business Solution, with the word “Practice” crossed out to get the reader out of doctor mindset and into business owner mindset.

Wishnie found a publisher, Stonebrook Publishing. Then he waited for publication day.

One afternoon, Wishnie drove home to his apartment complex and picked up his mail before hitting the nearby steakhouse. At the bar of the steakhouse, he opened a small package and found the first hardback copy of his new book.

“I had tears in my eyes,” he recalls, because he was so proud. He couldn’t contain his excitement and shared his good news with everyone at the bar. He still remembers the moment with a thrill.

The rewards didn’t stop with a proud moment at dinner. The book brought Dr. Wishnie recognition in his field. He often receives positive feedback from podiatrists and other medical professionals who benefitted from the book’s advice.

“It’s helping me with branding myself. I’m the guy who wrote the book!” he says. Book promotion feeds into his social media strategy as well.

Wishnie received invitations to podcast interviews within and beyond the podiatry world, such as Prosperity and Something Greater by Rem Jackson, Podiatry Legends, and more.

The proudest reward, says Wishnie, is knowing he helped other podiatrists.

Doing It All Over Again

Wishnie’s book will teach business leaders to empower employees to make decisions in line with the company’s mission and vision. This makes employees feel valued and frees business owners from doing all the work themselves.

Don’t Deprive the World of Your Knowledge

Do you have that vital piece of information that others need? Maybe you think you’ll share it “someday” . . . you know, when you have time.

As Dr. Peter Wishnie says, “If not now, when?” Don’t deprive the world of your knowledge. Don’t let a busy life keep you from helping others. As Wishnie’s story proves, The Book Professor® can get your book written even around the busiest schedule.

If you’re a business leader interested in writing your book, contact The Book Professor® today and let’s get started on your book!