Authors Are Making Less Money? I'm Not Buying It - Write a Nonfiction Book with The Book Professor

Authors Are Making Less Money? I’m Not Buying It 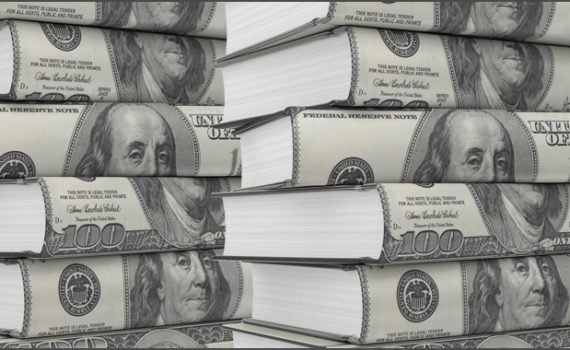 Authors Are Making Less Money? I’m Not Buying It

This article originally appeared on bookbaby.com

A recent Authors Guild survey suggests that author income is down dramatically. There are plenty of signs that this is not true and plenty of ways to leverage your book to make additional income.

Every few years, authors have to endure news of impending doom — at least as it pertains to the publishing industry and their chances to profit in it. Case in point: The Authors Guild 2018 Salary Survey reported author income has fallen 42 percent since 2009. Reports like these contribute to a growing and troublesome identity crisis among writers — newer writers, especially.

I believe these reports are inherently flawed. For one thing, the data presented doesn’t show a complete picture — especially for self-published authors. The 2018 Authors Guild survey, for example, only represents a tiny slice of authors who are publishing today. It does not account for all self-published authors and is actively biased toward older, traditionally published folks.

If you accept the commonly-quoted number that over one million new books are published each year in the US, this survey — with the small sample size it offers — represents something close to one half of one percent of authors who are actually writing.

To get more into the specifics, the Guild’s conclusion in the 2018 survey was that the median writing-related income for all authors — including part-time, full-time, traditionally published, self-published, and hybrid-published authors — was just $6,080, which is down 42 percent since 2009.

Does this represent a “crisis of epic proportions,” as the survey proclaims? I’d argue it doesn’t.

First, it doesn’t speak to the success of working writers, the folks who earn money through writing in addition to other income streams. Among those folks, the numbers are actually very encouraging:

No doubt, it is very, very difficult to make a comfortable living exclusively by publishing books. But does that mean all aspiring writers should quit? Of course not. The craft alone is inherently worthwhile. But, the reality this survey ignores is that the most successful writers today don’t rely exclusively on book sales for income. Rather, they use their books as springboards for other revenue opportunities. Their books create those opportunities, including additional writing gigs, speaking engagements, and brand/business building.

A book is not the be-all and end-all for a writer. Whether or not publishing income is as lucrative as it was in the past, authors still find substantial revenue in magazine, newspaper, and web publishing.

In addition to new content that might ignite the next book idea, some authors create articles based on their book’s content or even excerpt parts of their books and sell them as magazine or blog articles. These published works provide the opportunity to mention the book title in the “about the author” blurbs, providing additional promotional benefit and potential book sales. This is something you can do even while your book is awaiting release, touting in your bio “new” or “upcoming” titles.

Of course, more generally, writing success begets more opportunity. Editors will be more likely to want to publish you, and you’ll have the chance to work on new projects you find interesting — and that can make you more money.

I attended the National Speakers Association Conference in 2018, and every single attendee had written — or planned to write — his or her own book. In many cases, their book was the ticket that provided them access to speak at the conference. And many speaking engagements, I might add, pay handsomely. Hundreds of BookBaby authors have leveraged their books into very lucrative speaking careers across a huge range of topics.

Simply put, writing and publishing a book helps authors to legitimize their careers and positions them as subject-matter experts.

Building your business and brand

Finally, I know several authors who have written valuable books that could generate serious royalties, but they choose to offer them for free on their websites. Why? Because people who download those free books became aware of the author’s consulting business, training programs, and other services.

Your book, in this sense, can serve as an introduction to the business and brand of you — a business and brand which, when it’s all said and done, could very well bring in 10 times the amount of money book sales alone would have.

Look, authors are motivated by a wide variety of things: prestige, status, professional validation, checking an item off the bucket list… It deserves noting that most writers are going to continue writing regardless of the monetary rewards.

Still, those rewards and motivations are important. That’s why I believe it’s almost irresponsible that traditional industry groups release surveys like the one which inspired this article. In some sense, they’re lobbing weapons against perceived publishing industry bad guys, like Amazon.

Bottom line: if you’re an author, don’t be dismayed by findings like the Authors Guild survey. Consider, instead, findings like those released by the Bureau of Labor Statistics, which noted the median income for “writers and authors” in the US in 2017 was $61,820 annually. It even estimates the field will expand 8% in the next decade. So keep writing!