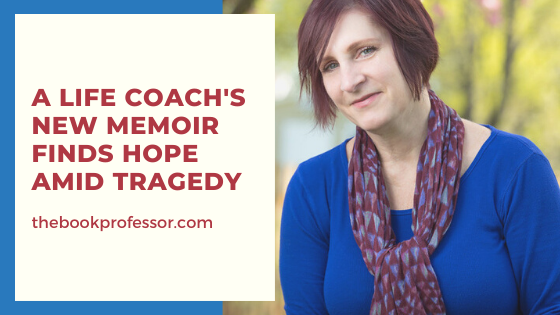 Nancy Jo Nelson’s “little book about big stuff” confronts the mystery around grief for a suicide victim with help from Nancy Erickson, The Book Professor®.

Trigger warning: This post deals with the subject of suicide.

Walking through the Unknown

Nancy Jo Nelson knew her marriage was over.

She had lived with her controlling, formerly alcoholic husband for seventeen years. They even had two children together. But no matter what she tried, it was clear nothing would save their relationship. Not therapy. Not hard work. Not even prayer.

Nelson said, “I grew up with the belief that I should be the anchor in the relationship — the problem solver, the savior. But I cannot make anybody do, think, or feel what they don’t want to. It’s not my job.”

She asked her husband, Bob, for a divorce in July 2009. On October 7 of the same year, and without warning, he disappeared. No one at work, home, or in his extended family knew where he was.

For Nelson and her family, daily life took on a surreal quality as the police searched for her husband. She was interrogated, asked to take a lie detector test, and even stood aside as cadaver dogs searched her property.

Five months to the day after his disappearance, Nelson and her family learned the awful truth. Bob had committed suicide in the woods just a mile from their home. As she and her family grieved, they had to carry on with their lives as well.

She said, “I learned that all I could do was be present when my family needed to talk through things. I couldn’t put a Band-Aid on this—it was out of my power and control. But I was beginning to understand that everything is out of my control. Everything, that is, except for how I choose to show up in any given situation.”

Though she would one day write a memoir about the period that surrounded Bob’s disappearance and suicide, she had to heal first. That healing process changed her profoundly, helping her find a strength she never knew she had. 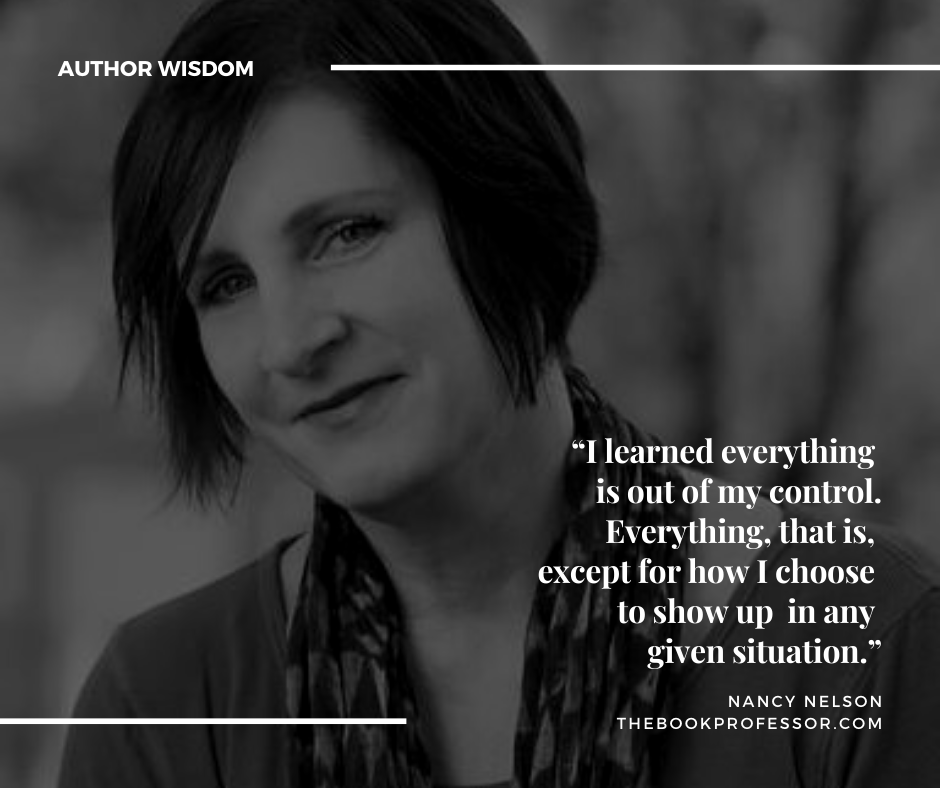 Nelson worked hard to help her kids continue forward as she and her family moved through grief. “I had to go to work, send my kids to school, and be present for them when they needed me.”

She also realized that, in Bob’s absence, she had to provide for herself and her children financially. She decided to go back to school and finish a degree in Applied Behavioral Sciences, one that she had abandoned thirty years earlier. Then, Nelson continued to develop professionally, studying to become a certified life coach.

At a professional event, Nelson shared the story about her husband’s suicide with another life coach. That person said, “This is a book. You’ve got to talk to my friend Nancy Erickson. She’ll help you.”

It was just the encouragement she needed. Nelson knew she had a unique story, what a friend jokingly called a “movie of the week.” But there was more to it than that.

In her hometown of Barrington, Illinois, several teenagers had recently stepped in front of trains to end their lives. She knew their loved ones needed someone who could speak into that particular kind of heartbreak.

Nelson said, “Suicide is a different type of death. The grieving process is, in many ways, unique. My daughter said, ‘No one talks to me about the good memories they had about dad. They focus more on how things ended rather than how he lived.”

Further, she wanted to show how those left behind could build their “life after.” She hoped to encourage the heartbroken that beautiful things can spring from tragedy as well.

But when it came writing, Nelson wasn’t sure how to create something as long and complicated as a book. She said, “I know how much I benefit from other people’s experience and knowledge. I can say, ‘I don’t know. I’m going to the expert that does know.’” That’s when she called Nancy Erickson, The Book Professor®.

Writing a Nonfiction Book that Makes a Difference 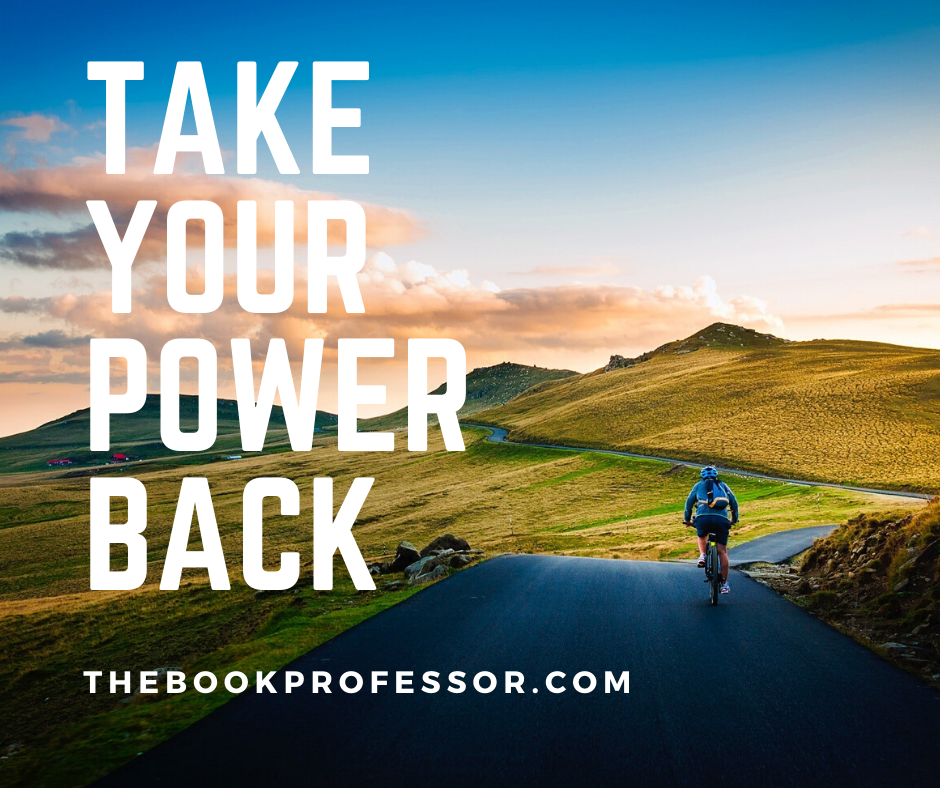 Nelson chose to write her book through the Group Mastermind program, which still allowed her a significant amount of one-on-one time with Erickson. After she wrote her purpose statement, defined her audience, and created her BookMAPs™, Nelson began her first draft.

She said, “The part that surprised me (and I guess it shouldn’t have) was that you do this on your own. Nobody writes your book for you. Nancy has great tools, but the bottom line was that I had to do the writing.”

She continued, “It was very cathartic. Nancy [Erickson] said at the beginning of the process, ‘The book writes you as you’re writing the book.’ And I dismissed it as nothing more than a nice thought. But I discovered it’s true. It’s really, honestly, true.”

Nelson found the most challenging part of the process came after she completed her first draft. The manuscript felt overly long, and she wanted to trim it to something that would make a profound impact on her readers.

She worked to make sure every line in the book supported her mission statement and spoke to her audience. Nelson found one tool especially helpful.

Erickson encouraged Nelson to search her book for every instance of the words I, me, or my. Nelson took the advice. If she deemed the passage wouldn’t connect with her audience, she cut it. In the end, her final draft was about a third as long as her first draft.

Still, she didn’t think the book felt right. Though she had a lot of compelling material, she believed it lacked flow, like she was trying to force it into its final form.

She says she’ll never forget the moment the book revealed itself to her. She was at a coffee shop with all the chapter headings of her book on separate pieces of paper. As she laid them out on a table, she let go of her preconceived notions for the book.

Suddenly, she saw how all the pieces fit together.

Nelson said, “One of the big things Nancy always said was that you almost have to take your hands off the wheel and let it come, let it flow. That’s how it worked for me. I tried to control it. But in the end, I had the overwhelming feeling that the book wrote itself.” 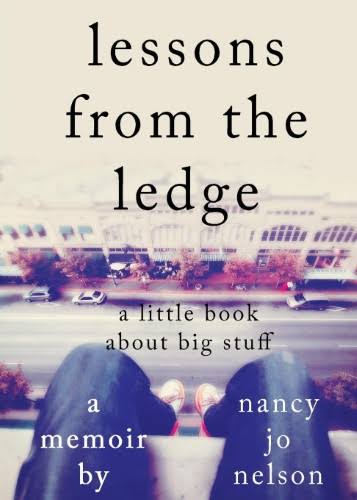 The whole experience was cathartic for Nelson. She said, “It’s about taking your power back. You can’t hand it over to anyone else.”

As she’s shared her book, she’s watched its message resonate with readers. One friend tapped her heart and said, “I took all the hurt and put it right here.” Nelson’s book helped her friend release that pain and start to find healing.

Additionally, the memoir has opened doors for Nelson to speak to a variety of groups about suicide and resiliency. A dance company even has plans to perform a piece on the subject, asking Nelson to consult.

Through it all, Nelson has become more aware of synchronicity in her life. She said, “One of the biggest lessons I’ve learned is this: You do what you need to do. But trust that in the background, beyond what you can see, things are percolating.”

About her partnership with Nancy Erickson, Nelson said, “The friendship—working with Nancy—was absolutely a wonderful, beautiful experience. She said, ‘Here are these tools. You pick what works for you.’ And that was very freeing to me.’”

You can buy Nancy Nelson’s compelling memoir, Lessons from the Ledge: A Little Book about Big Stuff, through both Amazon and Barnes & Noble.

Do you have a story you need to tell?

If you want to write a memoir (or what we call an Overcomer’s Story), we believe you have lived an experience the world needs to hear.

Unfortunately, many people who want to tell their story never finish their book. They may have notes, drafts, blog posts, and other pieces of a memoir, but they get stuck somewhere in the process.

At TheBookProfessor.com, we help authors put all of those pieces together. Nancy Erickson enables writers to see what they have, focus it into a finished book, and release something that can stand shoulder to shoulder with anything else in the marketplace.

We have a process to follow, a team that works with you, and a variety of tools and tricks to get you across the finish line.

You do the writing. We help you finish.